I met Annalisa Crawford through the April 2012 A-Z Blog Challenge. Her blog posts exuded energy and charm. I asked her to be a guest today, and I hope fellow writers/readers check out her blog, book - Cat and the Dreamer and enjoy our meet and greet. 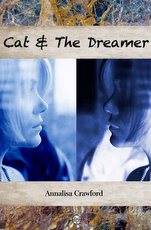 What are your current or upcoming works? I've got a couple of collections I'm working on at the moment. One is a trilogy of novellas set in the same town, and the other is gathering together my previously published short stories. Some of them were published in small press magazines more than 10 years ago - as a result, I'm sure very few people have ever read them!

Who is your favorite character in your books? There's a character called Murray in one of the novellas I mentioned above. He's in a story called The Traveller, and I based him on a couple of lads I had crushes on at school.

Here is an excerpt that introduces Murray:
I watch the stranger enter. As do all the women. We all look up, gazing out from behind the large yellow menus, or peering around the heads of tired, worn-out husbands. We all look up in clumsy unison, so he must have noticed. But he walks solidly towards the bar and faces the wall, pretending otherwise.
The stranger. An odd term to use; all the people in this room are strangers to me. But he is different; he does not belong. He stands out from the other men; not least because the other men are dressed in white shirts and gaudy ties, with heavy jackets slung across the backs of their chairs. They’ve been dressed by girlfriends or wives. And the girlfriends or wives are in pretty maxi-dresses with dainty sandals and too many beaded bracelets.

He – this stranger – is wearing frayed denim cut-offs, heavy black walking boots and a washed out, long-sleeved orange T-shirt. His hair is dark, the curled ends are bleached softly by the sun, his skin is tanned golden. His eyes – should I get that close – will be a smooth rock-grey or deep ocean green. He sweeps both hands through his hair and, for the first time, turns to survey the bar. Female heads swoop conspicuously.
He walks to a table in the middle of the room, drops his rucksack to the floor and slides into the chair in one fluid movement. He lifts his glass, closing his eyes and tilting his head, savouring the taste as though it was his very first. I almost feel the ice-cold lager in my mouth, the fine tingle of white froth on my lips, the droplets clinging to the rim. Women stare, caught up in fantasy, but as his gaze scans the room they lower their eyes and shrink back into their chairs in an inverted Mexican Wave.


I focus on his rucksack, which is large and straining. So he is not a Stranger, after all, but a Traveller

Any chance of a screenplay from your book? Who would you cast as your leading characters? Years ago it would have been Johnny Depp - no question! But he's a bit too old for that part now, so I'll go for Ashton Kutcher


Favorite tunes playing as you write Currently, I'm listening to the radio. But I'm also listening to The Vaccines. The music I listen to changes with each project.

Last movie viewed. HP & The Deathly Hallows, pts 1 and 2 with my kids. I haven't watched the other films, but I love the books. I just really wanted to watch the last installment.

If you could go anywhere on a paid vacation or retreat to write, where would you choose? Probably Canada. Somewhere a little bit cooler which would make me want to be inside, all wrapped up, but with a really good view of a lake.

If you won the lottery, but had to give away half the winnings, where would you spread the joy? As many charities as I could that were involved with children, diabetes and cancer.

Do you encounter writer's block? What do you do to get over it? Yes I do! To get over it, I gather together all my previously published stories and work at making them into a collection!


Thank you Annalisa for being a guest today, and good luck in all writing endeavors. Enjoy your summer.
Posted by Joanne at 8:33 AM