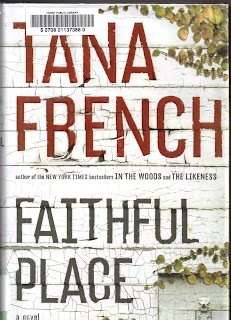 If you want a good read that takes place in the old sod, pick up Faithful Place by Tana French.
Her characters are rich and she moves easily from the past to the present, as Detective Frank Mackey is pulled back to his youth and family as he investigates a murder.
Poor Rosie Daly. Everyone thought she managed to escape Faithful Place, a downtrodden Irish neighborhood, to seek a new life in London. Frank was left behind waiting for her, thinking he was stood up. He chose to leave too, on that fateful night and ultimately became a cop, working undercover. Now, he gets a call from his sister Jackie that a suitcase was found stuffed in a fireplace and it's Rosie's. She didn't move on after all.
He's sucked back into family dynamics - alcoholic father, demanding mother, resentful older brother, and tentative younger brother, plus a loyal sister. Everyone knows everyone's business and the neighborhood is suspicious of Frank's motives as he uncovers Rosie's body, discovers betrayals, and seeks to resolve his feelings for Rosie. Mackey's juggling his beloved nine year old daughter, Holly, and her desire to know family. Plus, he has to contend with his ex-wife and job priorities.
French's writing is as smooth as Irish whiskey. She has a fine ear for dialogue and pacing. Her previous books In The Woods and The Likeness are equally captivating reads. Here's a sample description: (p.108) The air was so cold that it made a high fine ringing sound somewhere miles above us, like breaking crystal; her breath was hoarse and warm on my throat, her hair smelled like lemon drops and I could feel the fast shake of her heart trembling against my ribs. Then I let go of her and watched her walk away, one last time.
(p.134) I had spent my whole adult life growing around a scar shaped like Rosie Daly's absence.
Read The Faithful Place - pity Rosie's lost youth, commiserate with Frank on years of wonder and loss, and fight, cry, and drink with the Mackey family to past and present sorrows. Once you finish the book, a bit of the old sod sticks with you.
Posted by Joanne at 9:56 AM