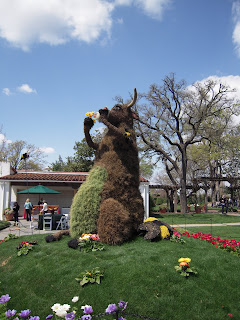 Not much to say. The Dallas Arboretum spring spectacular does its talking with flowers. I'm working up some haiku or poems, but for now, today's stroll shall suffice. 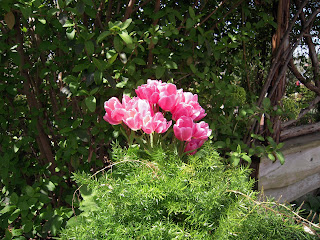 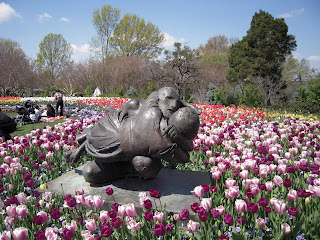 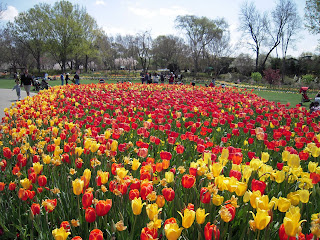 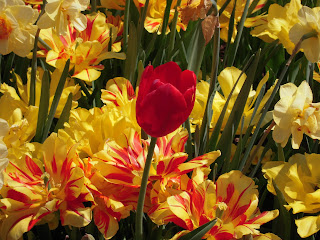 Posted by Joanne at 5:23 PM No comments:

Spring Ahead to Waterfront Reads 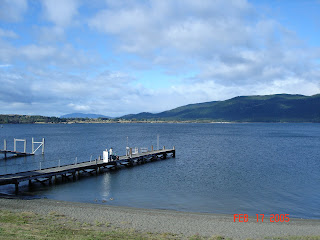 Spring arrived, albeit with snow, but let's ignore that fact and revel in the thought of a pier, wooden deck chair, or sand and a beach umbrella. Let's contemplate spring/summer reading. The Book Lover by Cynthia Crossen is one of my new favorite columns (WSJ 3/19/10). Here's one thing she had to say, "On the beach, however, I like being interupted by the ocean, so I want a book into which I can dip, daydream, dip,etc."
She recommends The Shell Seekers by Rosamund Pilcher, Becoming Strangers by Louise Dean, and Stone's Fall by Iain Pears.

Then again, according to Ms.Crossen, critic Anatole Broyard wrote, "The thought of people reading in the sun, on a beach, tempts me to recommend dark books, written in the shadow of loneliness, despair, and death. Let those revelers feel a chill as they loll on their towels." For that she suggests, Blackwater by Kerstin Ekman - a grisly murder mystery. 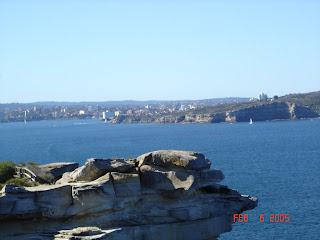 Enough of snow and winter and rainy, drab dreary weather. Let's think about sunshine, blue water, and summer reads. Or sitting on a rock and staring into space.
Posted by Joanne at 8:23 AM 1 comment: 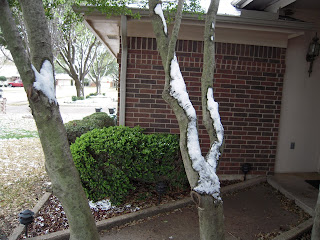 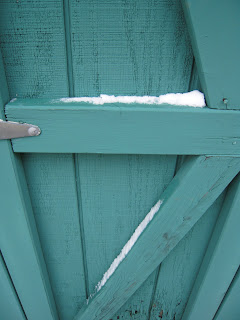 First day of spring 2010 - I don't think so. First 1-1/2 inches of rain and then the dreary day turned worse. Far more foreboding with snow flurries that accumulated. One inch in Bedford. Record snow for this day and almost a season record from DFW Airport. We were 1/2 inch behind for the year. Darn. 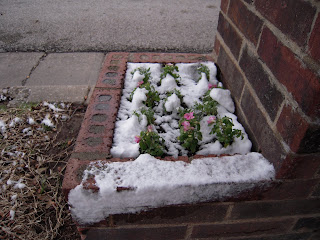 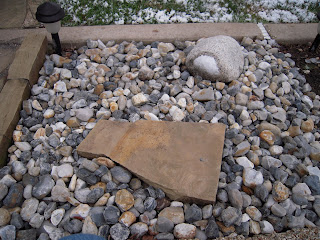 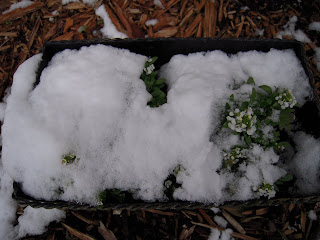 Yep -truth is stranger than fiction. Thus, my next plot point twist and turn could be snow on the first day of spring. Driving hazards, freeze dangers - just the whole description of snow and the fascination. Lovers hunkered down in front of a fireplace. Or the reality - punching the button once again on the thermostat and trying to figure out where that fits in the budget. Will folks believe it? They better! 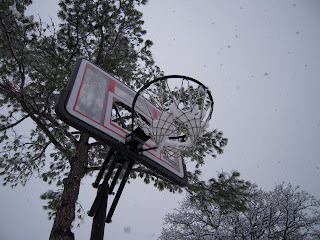 March is Madness. Chance of flurries today and I planned to enjoy the arboretum with friends. Instead this picture from 2/11/10 sums up the day. I shall have to keep highlighting my bracket wins over Ray, as we watch NCAA basketball.

"Hoop Dreams", "Hoosiers" - those are worthy basketball movies. I was trying to think of any basketball themed books? "Basketball Diaries" - but that was more drug themed if I remember correctly.

Instead, I have a selection of reading material as the sports commentators blather in the background. O - Oprah's magazine provides all that is worthy in the world of Oprah. I like that she features in-depth book reviews. Entertainment Weekly keeps me apprised of movies I probably won't see and another re-cap of Lost. Traditional Home magazine allows me to peer into other's snazzy spaces and garner fabulous gardening tips. Time magazine should arrive today and I can read if the world has ended. Wall Street Journal - I gloss through the economic lack of goodies to see if the world has ended. And finally, I'm almost finished with a book The Reliable Wife. It's been mildly entertaining. I like the main character, a woman who claims she's honest as she's poisoning her new husband with arsenic. It's not a deep book and can be read with basketball in the background.

Let the Madness continue.
Posted by Joanne at 10:22 AM 2 comments: 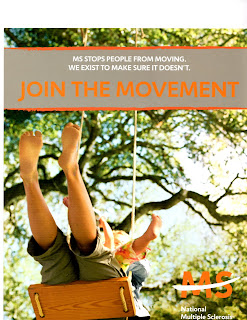 I had some time after a routine doctor appointment today to drop in at the local MS Society (Multiple Sclerosis) office and volunteer. It's spring break week and the place was hopping. I'm delighted to brag about young people, from seventh graders to college kids, who chose to put in a few hours to help stuff bags for the upcoming bike ride event in May. They could have gone to the movies, played video games, or hung out with friends. Yes, they do get community service credit hours for school, but I didn't have the feeling that any of them felt put out or burdened. It was their choice. 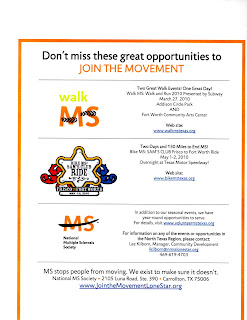 I write about this because, however you get your news, it is easy to get discouraged with the world and people in general. But, if you'd been in the MS office today, listening to folks chat and watching them work together, you'd have smiled. The sense of community spirit was heartwarming. 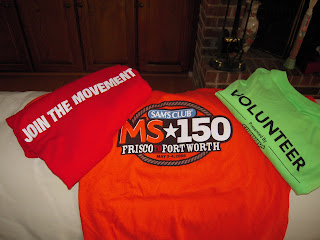 It's good to have a cause - something that interests you, gets you involved, and draws attention from one's own teensy problems. There are countless organizations operating on shoestring budgets, that make up for it with huge heart and energy.
Volunteer voraciously - it's good for the soul.
( http://www.nationalmssociety.org )
Posted by Joanne at 4:39 PM 1 comment:

I've always loved music. As a little girl, I wanted to be Diana Ross and begged to stay up whenever she and the Supremes were on the Ed Sullivan Show. Yes, I'm showing my age. Name the super groups and stars and I've seen them in concert - Rolling Stones, Fleetwood Mac, Peter Frampton, Sting, Rod Stewart, etc. Top three concerts -Paul McCartney, Bette Midler, Liza Minnelli. Bette and Liza - may be corny, but true show people of the highest order.

So, I admire folks who can write music and also sing. I'm still a music fan who's not stuck in the seventies. I enjoy new artists and I tivo the VH1 Top Twenty Video Countdown. There's some darn good talent out there as well as a few golden oldies lurking.

Number One this week is American Idol 2nd Place star Adam Lambert singing a Pink song (she's in a whole other league) What Do You Want From Me? Plaintive and catchy at the same time.

Number Two - Need You Now by Lady Antebellum. They are a "country" group, but this crossover song is kickass.

Other top videos - Kris Allen, The Fray, OneRepublic, Lifehouse, and checkout Orianthe - this female from Australia was pretty much discovered by Michael Jackson for his This Is It tour. The young lady is attractive, can sing, and is monstrous on the guitar. The fingers fly!

John Mayer is talented and his Heartbreak Warfare tells a story.

Oldie but goodie, Bon Jovi, have a new song Superman Tonight which highlights the role of volunteers in this world. Nice message and cool video.

Keep an open mind to new music and superb lyrics. There's a lot of material waiting to be discovered. And based on his appearance in a Timbaland video, I'm psyched for some new Justin Timberlake tunes.
Posted by Joanne at 7:43 PM No comments:

Visitors stopped by the other day. In no hurry, they lounged poolside and plunged into our rather brisk water with nary a qualm. They floated happily, bemused by the pool cleaner, and unmussed by the fountain spray.
I tiptoed about taking pictures and I'm guessing as long as I didn't do a cannonball off the diving board, they were delighted to pose for this post.

I think they were scoping out nest choices and our back bushes looked inviting except there are rumors of a large hawk in the neighborhood. They paddled to and fro, possibly wondering about the lack of water reeds, fish, turtles, and other nature flora and fauna.

They left quietly that evening. No farewell quack. Just a few downy feathers floating in the pool. Cute couple - we wish them well.

Rolling Art Adventures in Fort Worth 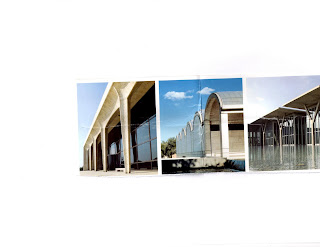 Note - I'm still learning how to use my scanner. Saturday was art adventure day in Fort Worth for Ray and me. First the Kimbell. I got to view the Private Collections of Texas exhibit through Ray's eyes. He was busy counting how many times he heard the word "metaphor" as people discussed a piece or students scibbled furiously on paper for an art appreciation class. Ray rolled his eyes.

I enjoyed listening to a father discuss art with his three sons, ages four to eight or so. First discussion. The father says, "This one is called Guitar on a Table. What do you think?" (It's a Picasso. ) The youngest boy says, "He can't draw."

Moving on, they are in front of a Mondrian talking about the different size blocks and colors. The father says something about circles. Again the young wise child says, "Maybe he can't draw a circle."

That's what has held me back in the art world. 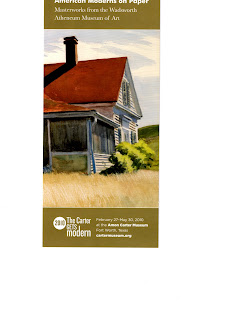 Onward to the Modern which had an Andy Warhol exhibit: Warhol, The Last Decade. Some of the prints and silkscreens are cool. Some are "different". Again Ray rolled his eyes. My favorite piece at the Modern, in their regular collection, is a floating ladder. Something about it appeals to me and I don't know that I can explain it. Perhaps it's a metaphor for life. (Ray rolled his eyes at me)

Finally, after lunch at Dos Gringos (yummy nachos), we strolled to the Amon Carter and enjoyed their American Moderns on Paper - stunning drawings and watercolors by Edward Hopper, Stuart Davis, Georgia O'Keefe, and one by my fave Andrew Wyeth. Subtle and detailed. Ray agreed and did not roll his eyes.

Visiting the three museums - experiencing so many facets of art, listening to people discuss art, seeing pictures through the eyes of a child, and rolling your eyes at some art - made for an excellent adventure day in Fort Worth
Posted by Joanne at 3:14 PM No comments: 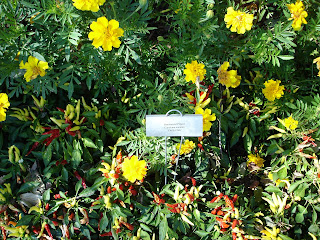 Sun is shining brightly today and there's a hint of spring in the air. It teases us. By the weekend, back to rain and temps in the 40s. Here are some best of shots from past springs at the Dallas Arboretum. 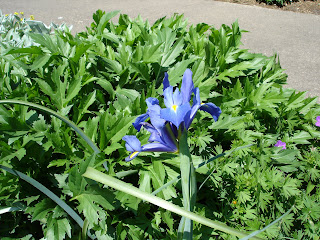 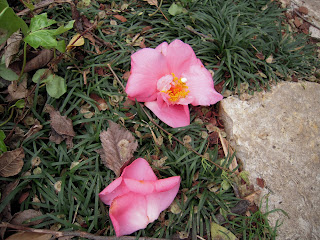 This year's spring festival begins March 6. I'm ready for some tulip frenzy and haiku inspiration. Pen is poised.
Posted by Joanne at 8:15 AM No comments: