Think about the power of the letter "i".

Not capitalized, merely lowercase, "i" has grown in stature since elementary school days when I signed notes "i love you" and the dot over the "i" was a heart.

Later, it was all about capital I - power, money, status, the Me-Decade, Janet Jackson singing "What Have You Done for Me Lately?"

Now the small "i" rules:
Nintendo Wii - two i's entertain and keep us fit.
And the king of i, the world of i - the Apple i courtesy of Steve Jobs. Absolute genius in the world of technology, communications, and entertainment. I heard him speak back in the 1980s. Working for an electronics/networking company, I attended a conference in Mountain View, CA and was thoroughly impressed with this confident man dressed in black who spoke of the future. Alas, not enough to buy Apple stock and hold on to it. (Duh). But Jobs was memorable. The room was electric and you could feel his excitement, his passion, and the energy of Apple.

iPhone - impressive piece of machinery and the apps alone entertain. Forget hanging at the water cooler. I gravitate to a co-worker's desk to see and hear iBurp, iFart, iBubblewrap, and to me the most impressive - iLighter. Truly, you can use the phone at a concert to wave a pseudo-lighter. The flame flickers.

and the latest product and buzz - iPad. Will this transform everything? Who's to say? But reading the old fashioned paper newspaper this morning and perusing the comics, I did think of one fun thing that's eliminated. Remember using Silly Putty as a kid? You spread it out over a favorite comic strip, pulled it up, and voila the picture transferred.

Now that's an app I'd like to see duplicated. iPutty??
Posted by Joanne at 3:02 PM No comments:

Visit Your Own Backyard 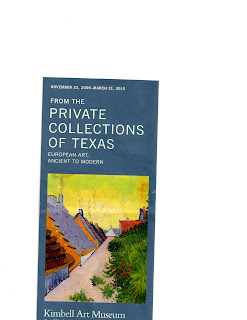 Nothing like having an out of town visitor to get the creative juices flowing. Where shall we go? What shall we eat? What's next? And let's eat! Anytime a good friend comes to town, we hit the Kimbell Art Museum in Fort Worth. Gorgeous building, stellar art collection, and through March 21st a special event - Private Collections of Texas. Van Gogh, a Rembrandt, Gainsborough, Cezanne - you name the artist and it's represented on the walls of the Kimbell along with comments from the Texas collector and sometimes a photo of where their art is placed. One humorous comment, "You know a large picture covers cracks in the wall." Yeah, Waterlilies by Monet is the way to go in decorating.

After wandering the galleries, go eat at Lucille's on Camp Bowie Boulevard. 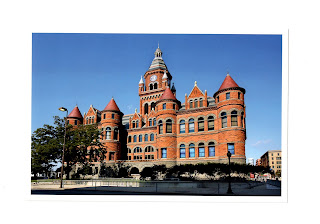 On a rainy Saturday, the Old Red Museum, in downtown Dallas proved interesting. The courthouse is now renovated and houses an excellent museum of Dallas and North Texas history. Films, displays, and plenty of interactive screens keep you moving and involved. I was amazed by how many newspapers and gazettes were in circulation back in the day. 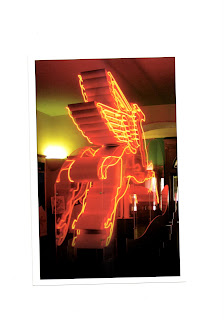 Cool to see the Pegasus sign, a former beacon of the Dallas night sky. It's now on display in the Old Red Museum. Plenty of stories to learn as you explore your own backyard. In turn, it prompts stories to create or embellish.
Dallas good eats - S&D Oyster on McKinney. 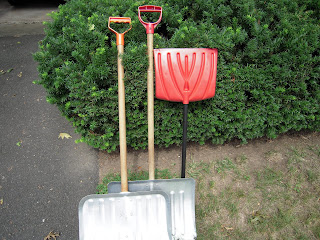 Shovel ready is number one on a list of Banished Words and Phrases for 2010. In honor of over use and general uselessness, Lake Superior State University (Michigan) released their 35th annual list back on January 1st. (Time Magazine, 1/18/10 p. 67) Obviously there are a lot of economic terms and some political jargon. It's amusing to read the list and agree with the most obnoxious offenders
1. Shovel ready
2. Transparent
3. Czar
4. Tweet
5. App
6. Sexting
7. Friend, as a verb
8. Teachable moment
9. In these economic times...
10. Stimulus
11. Toxic assets
12. Too big to fail
13. Bromance
14. Chillaxin'
15. Obama, as a prefix
Do you agree? Please add to the list or start the compilation of 2010 offenders.
Posted by Joanne at 8:47 AM No comments:

Who is a Hero?

"Who is a hero? I was not. I was just an ordinary housewife and secretary," said Miep Gies in a 1997 interview. (Associated Press) She considered it her human duty to help hide the Frank family during World War II. Unfortunately, the family was ultimately discovered and sent to concentration camps. But, left behind in their tiny quarters was The Diary of Anne Frank.

Miep Gies found it and returned it to Anne's father, Otto, after the war. Anne died in the camps but thankfully her words were able to survive, be published, translated, and forever remembered. The diary is a tale of dreams, worries, concerns, angst, love, family, and hope. At a time of true despair, it registered hope for the future.

Strong and powerful, The Diary of Anne Frank is a classic and plain and simple - a darn good read for any age at any time.

Miep Gies died at the age of 100 this past week, a quiet unassuming hero.
Posted by Joanne at 9:12 AM 1 comment: 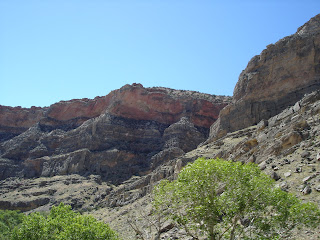 The difference between winning and losing is quitting. Ross Perot -corporate magnate (from Dallas Morning News, Business 1/3/10).
Day Thirteen of 2010. Middle of January. This is the time when resolutions begin to falter, when maybe that daily word goal is deemed ridiculous, and when one's plot line goes kerplooey. Quit? Nah!
Sure, maybe I'm slogging along at the scrabbly base of the terrain. But there's scrub to grab (i.e. a new character to create), there's toeholds (a gripping action sequence to write), and sure, there's tumbling rocks (throw in some humor).
Slowly but surely, the words build, grow cohesive, and suddenly I can see my goal, and the next, and the next. So what if there's a few skinned knees (rejections)? That's what bandaids (rewrites) are for.
Posted by Joanne at 10:01 AM No comments: 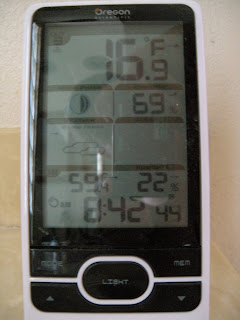 Bedford, Texas January 8, 2010. We actually awoke to 13 degrees. By the time we got our act together to take a picture, the temperature was a balmy 16 degrees outside. BRRRR. This is NOT "normal" Texas winter weather. 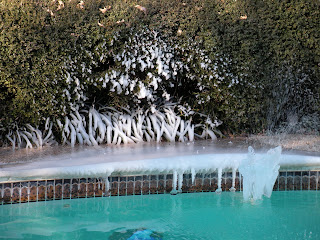 Our pool is creating its own winter wonderland effect. Blustery winds blew the water around the fountain and on to the bushes creating frozen fingers and our own icy waterfall. 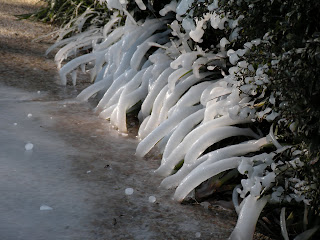 So I sit cocooned at my desk, layered in t-shirt and sweatshirt along with fuzzy slippers and an afghan (thank you Nana Crowther) at the ready. Now do I write a winter tale ... perhaps an icy scene? Or because I am in the land of make believe, shall I head off to a magical island? Harken to a faraway land down under where in January it is summertime and I can enjoy palm trees and a garden in Roroturo, New Zealand. 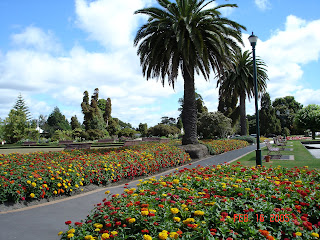 I'll do both. Perhaps a poem inspired by this frigid weather, and a shorts wearing travel scene. Get out the sunscreen either way.

I want to win a chance to blow up Texas Stadium ... but darn, Kraft requires one to be between the ages of nine and twelve. They kick off a national essay contest today for kids who have made an "explosive difference" in their community. ( See Dallas Morning News - Irving Region 1/7/10) Whoever wins the 300 word contest will get to push the button that triggers the implosion. How cool is that?

It gets cheesier. Kraft is introducing their new Cheddar Explosion this spring - hence the tie-in. Somehow, Texas Stadium, a famous Dallas (well, in Irving) landmark, is combined with America's Team for the sense of community (then again, the new stadium is in Arlington) and this spirit should be embodied in the essay. I assume a few orange mac 'n cheese fingerprints on the paper can't hurt.

Maybe I should get into photography - say "Cheese".
Posted by Joanne at 10:53 AM 1 comment: 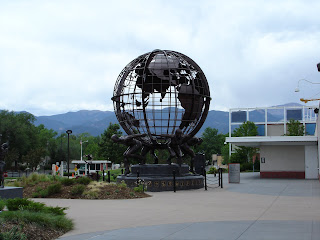 Bask in the glow of the new year, embrace the world, and seek to put your mark on it.

The Dallas Morning News (Sunday, January 3, 2010) business section featured quotes from various community leaders and I was struck by many of their thoughts and inspirations. Today I quote Ms. Adelfa Callejo, attorney, who likes the saying, "Be a master of the job before you. Be a student of the job above you. And be a teacher of the job below you."

I shall heed these words as I work on re-writes today and study other writers.
Posted by Joanne at 8:51 AM No comments: 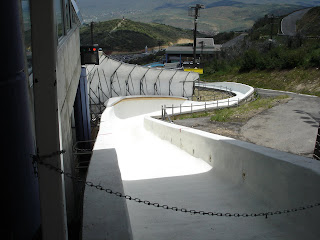 Shakespeare's King Henry the Sixth, Part I: "of all base passions, fear is most accurs'd" (V, ii, 18)
I'd say so if I was facing a bobsled run like this in Park Cities, Utah 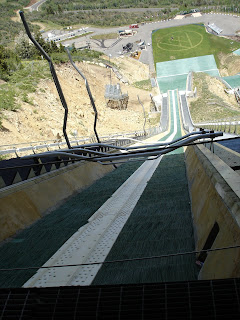 Olympians shall face the real ski jumps in February 2010 in Vancouver, BC Canada. Here at Park Cities, Utah athletes train. This picture was taken a few summers ago. I can't imagine facing this slope for the first time. Oh, you work your way up to it, but sooner or later, if this is your life dream you are going to shove off and hope for the best.

Then again, it's 2010 and I face a blank page. Or I face my NaNo novel and delve into serious edits and re-writes. A new year brings new fears or raises some old ones. Take a deep breath and let's address those fears, curse those fears, and plunge ahead to conquer those fears.