Well, it's New Year's Eve and you can tell what I've done most of the Christmas/New Year holiday - movies. I love seeing films on the big screen, and fortunately my favorite theater, Cinemark Tinseltown, has matinees for $4.25. Sssh - don't them that is really inexpensive. I don't want them to enter the 21st century. So, here's the last review for 2012 and then no doubt it's onward into 2013 with Les Miserables, Zero Dark Thirty, and more.

Silver Linings Playbook is humorous angst, if that's possible. We meet Pat (Bradley Cooper, spreading his wings as an actor) as he's released from a psychiatric hospital. Now he's back living with Mom ( a fretful Jacki Weaver) and Dad (uptight Robert DeNiro) and trying to cope with the world again. His goal is to get back his wife, and he has to prove to everyone that he has his act together. That's tough to do when the song "My Cherie Amour" triggers rage at the doctor's office, when he jogs wearing a garbage bag over his track suit, and when he meets another unhinged person and sparks fly.

Jennifer Lawrence shines as Tiffany. Her husband died, she slept with everyone at her office and got fired, and she's a loose cannon training for a dance competition. She convinces Pat to be her partner and in turn she'll smuggle his letters to the separated wife (by restraining order). As they practice dance, the friendship grows and yet Pat is fixated on the wife.

Meanwhile, the father is running a bookie business and is obsessed with the Eagles. He tries to bond with Pat and even blames himself for Pat's issues. There is a lot of shouting in this movie, and plenty of tension. Pat has no social filter on his mouth, and with Bradley Cooper's excellent acting we can watch the conflicting emotions cross his face. Or we can feel his confusion.

Ultimately it is an evolving love story and also a family in crisis movie. And Silver Linings Playbook is funny. Amidst all the angst and crazy, you will like these people and root for them to win. It is R rated for good reason and is for grown-ups looking for a movie with a solid cast and story. Oscar buzz alert. You'll want to place your bet on this one.

Author Lee Child's created Jack Reacher, over six feet tall, two hundred pounds, blond hair, blue eyes, brains and brawn in a magnificent package. Now who shall we cast in that role? Hmmm. Thinking, thinking. Did you think of Tom Cruise - all five foot seven or so, less than two hundred pounds, brown hair and dark eyes? Well, that's the cinematic Jack Reacher in the movie of the same name, and it turned out okay.

The key to any Lee Child's book is the action, and the movie brings his book, One Shot, to life with crazy violence, plenty of intrigue, government rogue operators, and lots of twists and turns. Tom Cruise has always played smart, so he's perfect in that regards. Snappy dialogue raises the stakes of what could be a regular action thriller movie. Instead, this is sharp with plenty of give and take. Throw in Robert DuVall at the end and you've got cinematic gold. Nothing like an old coot who can shoot a gun, and out act anyone in the room.

The key to Jack Reacher is he can't be found unless he wants to be found. He shows up at the CIA HQ just when a sniper gives Reacher's name. Why did this guy snap and shoot five civilians? Leave it to Jack to start figuring out if it was random or if there was a connection between the victims. And then the whole thing goes international with some nasty characters in the mix.

This is a very hard R with over the top violence. But I call it movie violence - just a barrage of bad guys shooting bad guys and good guys shooting better. I don't condone violence, but I can handle this because it's non-malicious cinema shooting. Great car chases abound, and of course Jack Reacher can fight and win over five guys. He's quick, clever, and has Special Forces super duper secret moves.

Movie Review: This is 40

This is 40 - sheer laugh out loud funny. It's R - overuse of the "F" word, but other than that, if you are indeed forty or beyond, you will laugh yourself silly. Judd Apatow struck movie gold with Knocked Up and returns with a spin off using the Paul Rudd and Leslie Mann characters that we met before. Leslie Mann is Judd's real life wife and the girls playing the daughters - yep, their real daughters. Consequently, so many scenes feel like real life on the screen. The girls squabbling, the dad wondering what's going on, the wife frustrated at her life, the girls realizing the parents are fighting too much.
The movie has angst, but it gets resolved in comedy and doesn't suck you into depression. And it is just plain funny. Albert Brooks is Rudd's father. He's been mooching money forever and Rudd really needs to cut him off. But the man now has triplets that are around five years old and he uses that card on Rudd, the half brother. Mann's been distant from her father, John Lithgow, a very rich surgeon with a second family that he spends time with. Thus both Paul and Leslie have parent issues. They have money issues. They have communication issues.

And they have love. That's what it boils down to in a successful comedic way. They said, "Til death do us part," and yep, even on days they don't like each other and could be plotting the other's death (trust me, it's funny), they love each other and the girls. And yep, that sums up This is 40.

Stay through the credits for an outtake with Melissa McCarthy. The ad libs are hysterical as her scene escalates and she has everyone cracking up.

You'll walk out of the theater smiling. 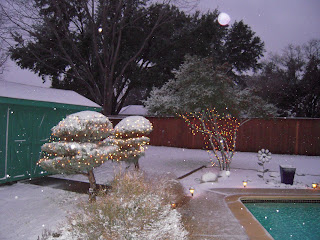 It is NOT officially a white Christmas because we did not awaken to this. It rained 1-1/2 inches, then turned to sleet, and then snow. Ray and I wore our new matching Jockey Blue Plaid loungewear all day. No need to change. Forget going to a friend's party - we were snow/iced in for the day and night. 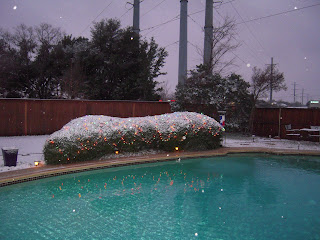 Snow adds an added dimension to the light reflection. Yes, I froze my ass off for this picture 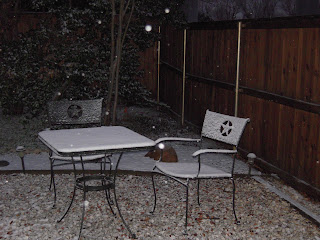 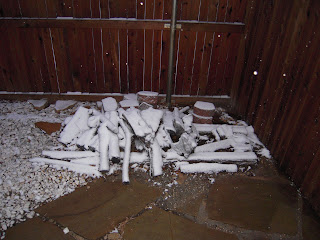 A Texas Santa ornament given by a Pennsylvania friend, Joan.
Cowboy hatted snowman.
Fond memories of Australia. We actually went there in February,2005. The 2004 ornaments were on sale and I wanted a kangaroo.
Yes, this is a Christmas filler post. Rudolph and I wish everyone a very Merry Christmas. Cheers and good health to all.  Peace on earth.
Posted by Joanne at 3:44 PM 2 comments:

Looking at this ornament we received from Kevin, age 6, in first grade (he's now 31) makes me reflect on how fortunate we (my family) are in good health, good cheer, memories, and in life. For too many families in Newtown, CT, that ended. I've reflected on the horrible shootings, cried at the news stories, and feel at a loss for words.
Our daughter-in-law, Maria, crocheted this lovely snowflake. Think about how those first graders with the snub-nosed safety scissors were hacking away at homemade snowflakes for their trees or windows.
Yes, I love snowflakes. We don't see too many in Texas
Ray's pepper plant has gone crazy. I liked this little garden angel peeking out from behind the bush. That's all I can present in memory of those kids and their teachers for now.
Posted by Joanne at 6:09 PM 1 comment: 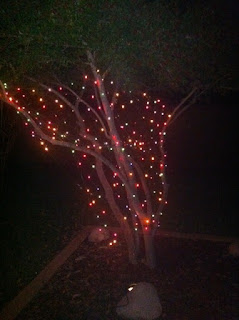 One Flasher
by Joanne Faries

Layers of Tape
by Joanne Faries

attic haul down the ladder

but I can still make out my late mother's writing

wishing me a Merry Christmas

Life of Pi - hmm. I didn't read the book, but I'm guessing it was confusing and full of symbolism. I chose to see the film in super HD/3D and paid the $10 price. The filmmaking and cinematography were eye candy wonderful and no doubt shall get Oscar nominations for director Ang Lee. But, when I talk about that stuff first, well it means the movie wasn't my favorite. It was okayish, but I can't recommend it for everybody. It was slow and I did check my watch at times.

An Indian family has a zoo, but it must be sold and the family is moving to Canada. They own the animals and so board a freighter to cross the Pacific. A violent storm sinks the ship. These scenes are really good and I almost needed Dramamine to survive. When the sun finally shines, a teenaged Pi finds himself on a lifeboat with a zebra, a vicious hyena, an orangutan, and the Bengal tiger named Richard Parker. Life and nature are cruel. Ultimately it's Pi and the tiger who must try to survive.

The story is told in flashback by the grownup Pi, and I don't know that I liked the narration. As far as the young man Pi out in the Pacific - his efforts to survive and his communion with the tiger are quite good, as is the acting. Time Magazine in the 12/3/12 issue says, "Life of Pi is a giant leap forward in expanding the resources of cinema. Magical realism was rarely so magical and never before so real." I'll agree with that, but is that enough to make you see the movie? It's a tale of survival and faith, but is it worthy of full price and a tub of popcorn. My guess is too much holiday competition. The boy and his tiger will sadly sink.
Posted by Joanne at 7:58 AM 3 comments:

take time to say thanks

thanks to all loved ones

shed tears of joy, not sorrow

breathe deep and look around

no phone, no electronics, no gadgets

breathe deep and look around

let your brain take the snapshot 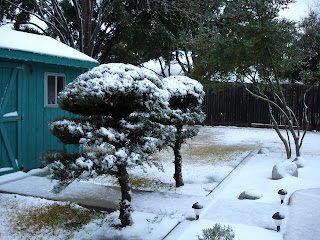 crisp snap in the air

stick out a tongue

I've been a bit bah humbug, but I'm slowly building up some Christmas spirit. I think it's the weather - hard to be into hot chocolate and sweaters when it's eighty degrees. I'm wearing shorts and raking leaves. Nonetheless, I visited two friends this past weekend and their houses were quite cheery with decorations. The pop of reds and greens warmed the cockles of my heart. Maybe I won't be a Grinch after all. 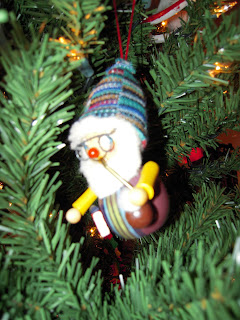 So here's a poem to kick off December and the Christmas season:

from mountains to prairie to sea

bells chime to bless you and me

peace in all hearts

family hugs all around