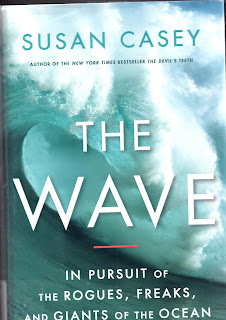 Anyone caught in undertow feels powerless. Anyone knocked over by a strong wave appreciates safety on dry land. The rough and tumble spinning confusion of where's up? and where's down? is scary.
The Wave by Susan Casey thoroughly researches rogue waves, gargantuan freaks of nature that arise from seemingly nowhere. From the research vessel RRS Discovery, trapped in the North Atlantic, to surfer experiences with Laird Hamilton in Hawaii, Casey explores shipwreck cases, talks with scientists, and witnesses firsthand the power of the ocean. Tsunamis can threaten the global shipping system, and there's so much yet to learn.
p. 7 The force of waves is hard to overstate. An eighteen-inch wave can topple a wall built to withstand 125 mile-per-hour winds. Imagine surviving a hundred foot wave.
p.14 Describing the giant wave Pe'ahi aka Jaws: The white feathering as the wave begins to crest, the spectrum of blues from rich lapis to pale turquoise, the roundness of the barrel, the billowing fields of whitewater when it comes crashing down ...
p.44 Discussing tow surfing: There was so much fury in this wave, a meat-grinder-cement-truck-wrath-of-God fury, that even now to watch it on video is a sobering experience.
The Wave is well written in layman's terms. The book gives a thorough overview of various hotspots in the world for rogue waves, and explains how researchers work on prediction models. The various characters - well respected scientists and surfers - make for an odd yet intriguing pairing of knowledge. Susan Casey's respect and wonder for her subject shines through.
As someone who has come up sputtering from teensy waves, I enjoyed this book and found it fascinating.
H.L.Mencken: Penetrating so many secrets, we cease to believe in the unknowable. But there it sits, nevertheless, calmly licking its chops. (p.63)
Posted by Joanne at 9:09 AM