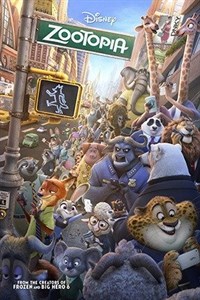 I was the only adult in the theater for Zootopia without a kid in tow, and I think I laughed the loudest.  This is a clever animated film with plenty of plot, fully developed characters, and a message too. Like the concept of utopia, the Zootopia metropolis attempts to have every animal get along.

In regards to Judy Hopps (voiced by Ginnifer Goodwin with enthusiasm) she achieves her goal as first bunny on the police force. But alas, she’s shoved into a meter maid role by the chief. However, she’s determined to be the best at writing tickets and enforcing the law. She meets Nick Wilde (sly snarky Jason Bateman) a conniving fox who seems to work hardest at beating the system. Nonetheless, the pair are drawn into a mystery.

Why are some animals reported missing? Why are some predators going “berserk” after so many years of “no attacks”?  Judy and Nick slowly work together, despite his reluctance, and uncover corruption in Zootopia. Per stereotype, a bunny and fox should not be a team, but in Zootopia diversity is applauded and the message in this story shows we should all get past assumptions.  It’s a good message in this day and age and the film is very clever at pointing fingers and making fun too. The scene with the sloths at the DMV is hysterical.

Zootopia is high energy and a blast. It’s fast paced and brims with activity – lots of animals to enjoy and characters to remember. Stay to the end and dance through the credits with the star gazelle (Shakira). Maybe someday we can achieve a zootopia utopia. Enjoy!