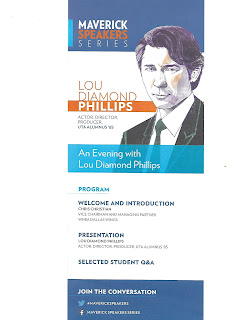 The fall Maverick Speaker Series kicked off with La Bamba - Lou Diamond Phillips.  He's a thirty year actor, director, and producer, and a proud graduate of UTA '85.  From his splash as Ritchie Valens in 1987 La Bamba to his current role in Longmire, Diamond has worked hard to pursue his dream and commitment to acting.

The theme of his speech was commitment. You have to keep moving forward. Keep learning. Be committed to people and the world. He was enthusiastic and had a nice sense of humor.

It was a fun hour and he certainly gave praise to his alma mater. He donated any proceeds from the night to Hurricane Harvey relief efforts for UTA students involved.