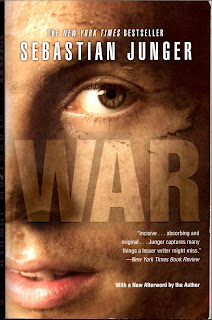 Sebastian Junger wrote a riveting book, War, about his embed in the Korengal Valley, Afghanistan (2007 - 2008). He worked with photojournalist, Tim Hetherington, and their reporting ultimately became the haunting documentary, Restrepo. Junger's ability to place his readers in combat, to introduce us to the memorable young men serving our country, and to describe war without a crazy one-sided agenda, is sublime.

The three sections of his book - Fear, Killing, and Love - sum up War. This is a difficult read in that, for me, I hate that this book even has to exist. You enjoy these young men and wish that they could be growing and developing in other circumstances. However, the Army is their job and they chose it and they are truly working hard to stay alive, accomplish a mission, and look out for their fellow man. You can tell from his reporting, the respect Junger has for these men.

Excellent writing and perspective highlight this book. I was engaged the whole time I read it, and then once it was over, War did not leave me. I sniffled for men who died, and now I worry for those men who are home safe, and yet forever changed.

Here are a few excerpts:
p. 144 War is a lot of things and it's useless to pretend that exciting isn't one of them. It's insanely exciting. ...... Combat isn't where you might die - though that does happen - it's where you find out whether you get to keep on living.

p. 146 There's so much human energy involved - so much courage, so much honor, so much blood - you could easily go a year here without questioning whether any of this needs to be happening in the first place.

p. 234 The only thing that matters is your dedication to the rest of the group, and that is almost impossible to fake.