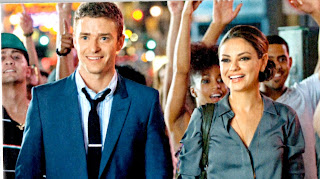 Friends With Benefits is the Justin Timberlake/Mila Kunis version of No Strings Attached (Natalie Portman/Ashton Kutcher) which came out in the spring. Both movies feature pretty people, slick dialogue, ultra trendy lives, and absolutely nothing new or original. For my four dollar matinee, I was amused and the theater's air conditioning was cranking (crucial on Day 25 over 100 degrees in Texas). However, I'd hoped for something more.

Here's the writing analysis of this review: Rather than being drawn into the movie, I found myself thinking "No one really talks that way" and "Oh, the dirty language wasn't necessary there." I'm no prude, but it felt forced. Watching movies, I want to escape, and so I hold the writing to a higher standard. Part of the problem with movie comedies these days is the television comedies are better, especially on cable channels. They are smart packages with snarky dialogue and often racy themes. Consequently, a film like Friends With Benefits has to try harder to appear cool and wicked sharp, and whatever the nifty lingo is today. It's tough to pull off.

That said, I was entertained and I did laugh at various lines. Justin and Mila looked like they had fun together, trying to be just "friends" enjoying "benefits" (wink, wink, nudge, nudge, say no more). New York has never looked better. The characters enjoy spiffy jobs, spacious apartments, and breeze in and out of the most awesome places.

Mila's spacy mom shows up - Patricia Clarkson is the go-to actress for wifty wisdom. I found her character annoying, because Clarkson is such a good actress and deserves better. Justin's scenes back in Los Angeles with family were better. His father, played by Richard Jenkins, is declining due to Alzheimer's. Excellent actor and those home scenes were touching and demonstrated how this movie could have been raised to a higher level.

Summer fluff trying to be edgy. Go re-watch Midnight in Paris instead. That's clever writing.
Posted by Joanne at 6:28 PM