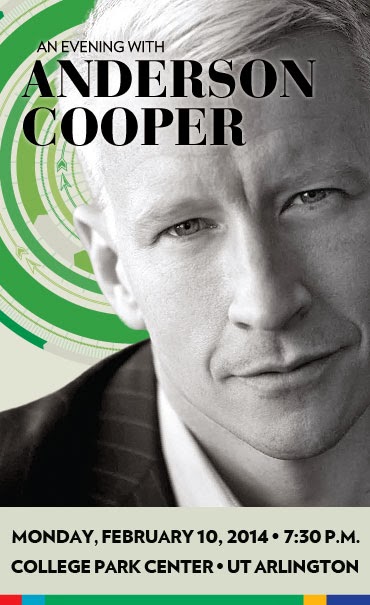 Ray and I enjoyed UTA's Maverick Speaker Series presentation with Anderson Cooper. This was rescheduled from the fall, when Anderson had to report on a tsunami. I held my breath this weekend, hoping there would be no disasters in Sochi,Russia. Fortunately for us, Anderson had to brave a cold Monday evening to speak to a warm audience in the College Park Center.

The set-up was a moderated Q&A. Anderson Cooper proved himself charming, lively, sincere, and interesting. He discussed graduating as a poly-sci major - "yeah, what do you do with that?" Basically he grabbed a camera, had a fake press pass, and headed to Burma to begin reporting. He said he went where others didn't want to go - Rwanda, Somalia, etc and reported on world horrors, seeking the stories of the people. He emphasized that deaths are important and one should listen to the survivors.

His career as a journalist from Channel One News to CNN anchor has been ever evolving and he said he wanted to always be learning. He urged students to work hard, hustle, and sacrifice to do the best. There were light moments - he acknowledged that his upbringing wasn't "normal" since his mother was Gloria Vanderbilt, but that also taught him about celebrity and limelight.

Anderson Cooper is a man on the move - striving to bring us stories about the good and bad in humanity.
Posted by Joanne at 8:58 AM