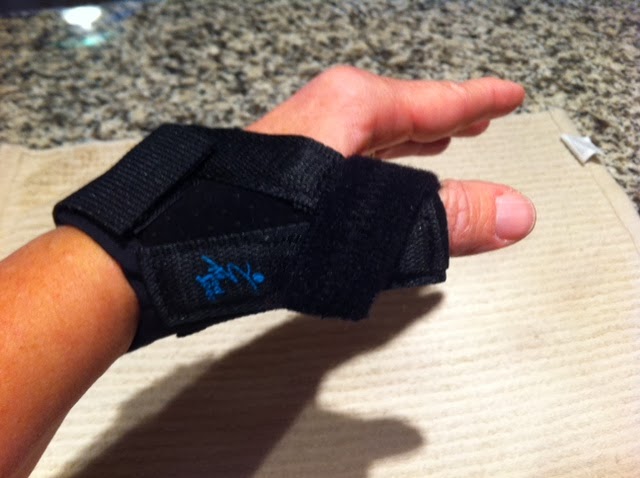 Starting back in October 2013, I had trouble at work with a binder clip.  At home, pressing a chip clip proved problematic. Very odd. Then at Christmas, I was baking my mom's recipe for mini-pecan pies. Pressing the dough into the pie pans with my thumb was excruciating.

My personal medical mantra is "Wait - it will go away. Ignore it."

Well,  this thumb issue pain did not go away, so I finally went to an orthopedic doctor two weeks ago. He pressed around, moved the joint, and asked if I'd been wringing rabbit's necks. Say what? The diagnosis - Gamekeeper's thumb. It's named after Scottish gamekeepers and their dealings with rabbits and fowl. This is very ironic for me - a person afraid of animals - see my memoir My Zoo World.

Also known as "skier's thumb" - again, ironic considering my upcoming memoir Athletic Antics about my lack of athletic ability. I include a chapter on skiing (or lack thereof).

Per Wikipedia:
Gamekeeper's thumb and skier's thumb are two similar conditions, both of which involve insufficiency of the ulnar collateral ligament (UCL) of the thumb. The chief difference between these two conditions is that Skier's thumb is generally considered to be an acute condition acquired after a fall or similar abduction injury to the metacarpophalangeal (MCP) joint of the thumb, whereas gamekeeper's thumb typically refers to a chronic condition which has developed as a result of repeated episodes of lower-grade hyperabduction over a period of time. Gamekeeper's thumb is more difficult to treat because the UCL has lengthened and become thinner as a result of repeated injury. It is moderately painful compared to similar injuries

The patient will often manifest a weakened ability to grasp objects or perform such tasks as tying shoes and tearing a piece of paper. Other complaints include intense pain experienced upon catching the thumb on an object, such as when reaching into a pants pocket     Yup - I've had that.

It is bizarre and ironic for me to have gamekeeper's thumb. Who knew?
Posted by Joanne at 9:33 AM