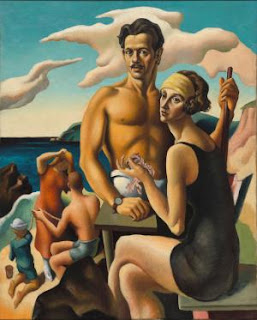 Last Sunday, Ray and I zoomed over to Fort Worth to the Amon Carter Art Museum. A current special exhibit is  American Epic:Thomas Hart Benton and Hollywood

Missouri native, Benton (1889 - 1975) is famous for his large murals, his flair for drama, and big screen imagery. His thinking "If epic themes such as cultural identity, westward expansion, race relations, and the American dream could play out on the silver screen, why not on canvas." (brochure blurb).

Time spent in Hollywood behind the scenes allowed Benton to capture the cameramen, set designers, etc. His work is shown alongside various movie clips. Over 100 works - painting, drawings, and illustrated books - demonstrate the verve and energy Thomas Hart Benton brought to American art.
Posted by Joanne at 6:00 AM