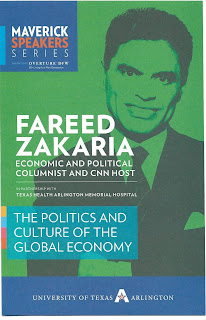 The finale of the UTA Maverick Speaker series featured Fareed Zakaria. His general talk on the issues of the global economy was enlightening. A key aspect he touched on was technology - money can change hands and cross borders at lightning speed. Communication has exploded exponentially. The speed of progress and automation affects perceptions and has heightened fears.

However Zakaria is optimistic. I liked his view that America has been great, is great, and if it can maintain the OLD American spirit we know - the generosity, openness, and ingenuity - progress can be made.

This is a man (an immigrant!!) who was born in India, educated at Yale and Harvard, has traveled widely, and is well regarded for his political and economic coverage of the world. His speech offered humor and was thought provoking.

Plenty of moments to contemplate.

Let's have a thoughtful week, everyone