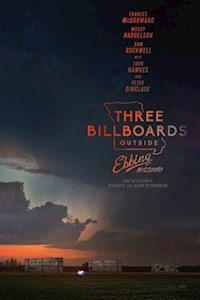 Three Billboards Outside Ebbing Missouri – what a title , what a film. I saw it. I don’t think I need to see it again. It’s up for a lot of Oscar buzz and is very worthy. It’s a challenging film. Can’t call it entertaining. It makes you think. It makes you sweat a bit. It can make you laugh – but it’s that uncomfortable laugh – like, this is sorta PC wrong, but it’s funny, but it’s wrong, and am I cleared to laugh?

So, Frances McDormand (beyond Oscar worthy, she is SO good in this film – just hand her the statue now) is mourning her daughter who was killed and died while being burned. Ugly. So horrific. And she’s pissed – the local cops haven’t solved a thing. The chief (an excellent Woody Harrelson) has tried, but there have been no clues.  The local worker bee cop (Sam Rockwell – very Oscar worthy) is a racist pig with a lot of issues and does not seem interested in a solution.  Meanwhile, she puts up three billboards that challenge the police force.

Bam. It’s front and center.  Many issues are faced in this film. Racism. Police work. Murder. And more.  Seems like the whole town is seething, and McDormand is front and center. Her very being vibrates. She is such a good actress and she can show fury, combustion, and more just with a clenched jaw, a raised eyebrow, and a cutting remark.

This film can get ugly. The language is brutal. The actions are ugly. These aren’t really pleasant people. But it’s truly an interesting story, a sad heartbreaking at times story, and everyone in it grows in some way or another.

It’s an Oscar must see film that is tough....that’s where I’ll leave it.  Wow and whoa and dang.