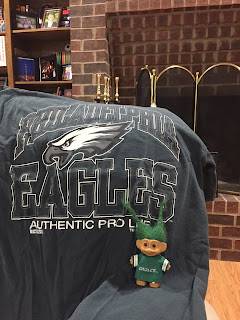 First off this is dedicated to my late mother, so don't dis this post.

Yea!  Eagles actually won the Super Bowl and they beat those darn Patriots.

My t-shirt is old. My troll is old. It's been awhile since his braids got to show V for Victory. Let's roll with that.

My mother (gone over 20 years now) loved football. On Sundays, my father was in charge of us so mom could watch her beloved Cowboys - yes, Cowboys with Roger Staubach and coach Tom Landry (both so darn awesome upright American heroes), and those frustrating Eagles. Oh she would get mad. She'd turn off the TV, mutter to herself, and turn it back on.  And that's how Eagles fans live - they hate 'em, they love 'em, they just die each Sunday and come back for more torture.

Who knows in this day and age? My guess is mom would have been watching this whole season and very sad when Carson got injured. Then half hopeful as Nick Foles made progress week by week.  But still skeptical, she would have watched the game, biting her nails like me, and shaking her head even in those last two minutes.  After all, Tom Brady - Patriot quarterback - is renowned for comebacks and wins. But no - totally stuffed... and Iggles Won!!!!!

My dad watched and even he was caught up in the excitement. I texted my brother and sister and we were biting our nails. Oh, Eagles fans suffer and now we can claim one Super Bowl ring.

Yes, Ray (my beloved husband), Cowboys have five...but it's been a while, baby.....when's the comeback?