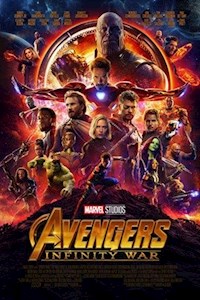 Who’s not in Avengers: Infinity War?  Ant-Man who has a movie this summer with Wasp (Paul Rudd), the Arrow dude (Jeremy Renner), and maybe someone else I can’t think of as I am not a fanatic.  Otherwise, the whole gang is around to battle Thanos (Josh Brolin) who’s huge and just wants to have all the power and kill half of humanity. No other reason that I could fathom, but what the heck. He was busy gathering Infinity stones from various planets and sacred keepers.  The stones represent Power, Soul, Time, Reality, Mind, and Space.  So it’s up to our favorite super heroes to try to work together, avoid death, and save the planet. Just another day.

This movie is filled with non-stop action, battles, quick quips, power struggles, team work, and off the cuff maneuvers. It’s fun and trippy and keeps the sagas moving along.  Loki (Tom Hiddleston) vs. Thor (Chris Hemsworth), Thor with Star Lord (Chris Pratt), Iron Man (Robert Downey Jr) and Spider Man (Tom Holland), Black Panther and Captain America and Black Widow and….the story circles between different planets and Wakanda and the USA as different stages occur in the fight. Dr.Strange (Benedict Cumberbatch) is holding onto the Time Stone – you think he’s in danger?  And Vision with the Mind Stone embedded in his head. The Scarlett Witch does her best to keep him safe.  If you have not watched any of the Marvel movies, then you will be lost. If you are up on the saga, then this movie will blow your mind. And poor Mark Ruffalo keeps trying to summon the Hulk, but the big guy isn’t angry enough. How can that be?