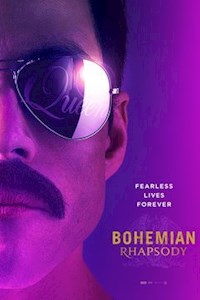 The first time I heard the song Killer Queen on the radio, I perked up my ears. This was a new and different sound and the lead singer’s voice soared effortlessly.  1970 – Freddie Mercury (lead singer), Brian May (guitar), Roger Taylor (drums), and John Deacon (bass guitar) formed Queen. The rest is another chapter in rock history. The film Bohemian Rhapsody brings the Queen story to life, and actor Rami Malek embodies the heart and soul of Freddie Mercury. He’s uncanny (and should be up for an Oscar).

I’ve read other reviews that say this film follows the usual rock story – struggling musicians, the big success, the excesses, the inevitable clashes, the egos, and the break-up/ final triumphs. Well, yeah – I’m very fine with that. Mercury was an outsider, in London with immigrant parents. He was always seeking his father’s approval, but knew he was different – meant to be a performer. And when he opened his mouth (his very unusual overbite mouth) – the voice of an angel emerged. Forming Queen – a group of misfits – the band explored and went beyond the norm. Their album, Night at the Opera, was groundbreaking. Bohemian Rhapsody, the song, was six minutes. What radio would play that? What are they singing? Is it gibberish? And operatic?

I enjoyed the film, the music, and Freddie’s story. He found true love early, but then strayed –confused, caught up in excess, but inherently lonely. The band was his family. And he did contract AIDS, was aware that his life was going to be cut short. He rallied the band back together to play Wembley stadium in England for Live Aid. Talk about taking a final curtain call – this was a performance for the ages. We are the Champions, We Will Rock You, Somebody to Love, and on and on.  Bohemian Rhapsody will stir you, make you want to stomp your feet and clap, and frankly sing-a-long like Wayne and Garth in a car.