Book Review - Where the Crawdads Sing 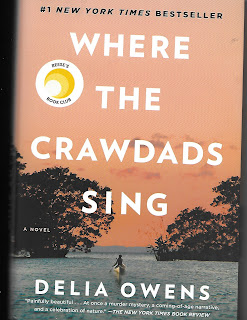 Where the Crawdads Sing by Delia Owens is one of the best books I’ve read in quite a while. There’s a reason for the buzz and for it being on the best seller list. It’s  a book that you want to start over and read again immediately after finishing it for the first time. The blend of descriptions, characters, and plot make you want to turn pages quickly to see what’s going to happen. But then again, the blend of descriptions, characters, and plot also make you want to go slowly – savor each moment as it evolves.

From the cover blurb – For years, rumors of the “Marsh Girl” have haunted Barkley Cove, a quiet town on the North Carolina coast. So in late 1869 when handsome Chase Andrews is found dead, the locals immediately suspect Kya Clark, the so-called Marsh Girl.

Kya’s story is told to us back and forth in time. We see her survive alone as a child, her nature knowledge a boon. She does encounter some locals. One, Tate, teaches her to read. Both have a love of the sea and have a respectful friendship. The other boy, Chase, is a player. Both young men are intrigued by her wild beauty in different ways. Back and forth the plot reels us in as the detectives work to uncover clues about Chase’s death. Did he fall from the tower, was he pushed, what’s the motive? Where are traces of evidence that could point to Kya or someone else in the town?

Cover blurb – Where the Crawdads Sing is at once an exquisite ode to the natural world, a heartbreaking coming-of-age story, and a surprising tale of a possible murder. Owens reminds us that we are forever shaped by the children we once were, and that we are all subject to the beautiful and violent secrets that nature keeps.

Here’s a sample of the gorgeous writing – the opening lines of the book.
Marsh is not swamp. Marsh is a space of light, where grass grows in water, and water flows into the sky. Slow moving creeks wander, carrying the orb of the sun with them to the sea, and long legged birds lift with unexpected grace – as though not built to fly – against the roar of a thousand snow geese.

P.S.  Thanks Linda Hoffman for sharing this book with me. Gotta love a fellow reader and good friend.