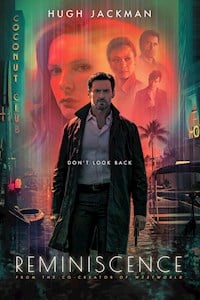 Watched Reminiscence on HBO Max, not in a theater.  I paused it maybe three times to get a snack, take a break, check on Ray.  Home movie watching is silly - I am easily distracted.  If I had paid money and seen it in the theater I would have watched and enjoyed without getting up and wandering around.  And that's my plug for in-theater viewing.

Anyway - I enjoyed this movie. It was clever enough and actually did keep my interest in the plot.

It's Miami in the future and it's under water.  Daytime is too hot to do anything. Folks sleep, etc. Night is when folks come alive and the whole underbelly of life emerges.  Hugh Jackman (Nick) runs a business involving memories - you submerge in a water tank and a disc is played that relives your best moments in your memory.  That's what people are into now while their lives are moments of desperation.

Hugh is also a detective along with Thandie Newton (great actress). They are trying  to solve a missing girl's case, a mobster involved situation, and Hugh's obsessed with Mae (Rebecca Ferguson).

Lots of intrigue, mixed up crap, and I can't give more detail. Reminiscence was a good flick, thanks to Hugh and cast. It had me guessing and was interesting future concept.  Thumbs up with a B+.