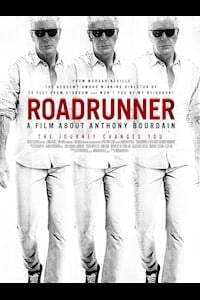 Anthony Bourdain was a force in life. He was a hot shot chef in New York City who rose from being a dishwasher. He wrote a very behind the scenes look at fancy restaurant life,. and launched a whole new career.

BUT - he was actually a very shy reserved man - very likeable on camera, very curious about the world, and maybe ready for a whole new life.

Then again - his television launch, his concern for so many issues might have been his downfall.

Roadrunner is a documentary that follows the man, the myth, and tries to explain his death by suicide.

This is an excellent film. I watched all of the Anthony Bourdain series and really liked the man's approach to food, people, and life.  When his death was announced, it was a shock.

There are no firm answers, but this documentary shows many cracks in a man who looks like he's on top of the world.  He should have had it all and been content.

But there's a dark underbelly.   Bring a tissue.  It's a really good film.  But it's sad and touching.