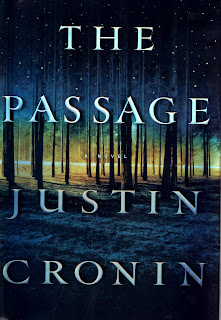 Mr. Cronin has had superb buzz on his book The Passage, and rightly so. I read rave reviews in Entertainment Weekly, the Dallas Morning News, and the Wall Street Journal, plus Stephen King has the book listed in his summer must reads.

I jumped on the bandwagon, just finished all 766 pages, and I have to say I did not skim, jump ahead, or get bored. I finished it last night with an out loud, "Wow!" and told my husband, Ray, he would love it.

The book blurb says, "It happened fast. Thirty-two minutes for one world to die. Another to be born." Yikes! Indeed, I don't want to give anything away, but there's an expedition in the jungles of Bolivia that might prolong life. Then again, could be trouble. There's a military experiment that might have gone a teensy bit off track. Uh-oh. There's action, chases, a few treks, and some memorable characters along the way.

And then there's his first sentence, which ropes you in, intrigues, and introduces you to a compelling character who holds the key to everything: Before she became the Girl from Nowhere - the One Who Walked In, the First and Last and Only, who lived a thousand years - she was just a little girl in Iowa, named Amy. Amy Harper Bellafonte.

The Passage is a saga - there's love, fear, doubt, recrimination, and exaltation. Births and deaths abound. There are some scary creatures, and sometimes they are human, or part-human, or part of a dream. This book is enthralling and the writing is damn clean. Descriptions, dialogue, character development - check, check, check.

Trust me. If you really love a great story, this is your must read summer immersion.
Posted by Joanne at 5:30 PM