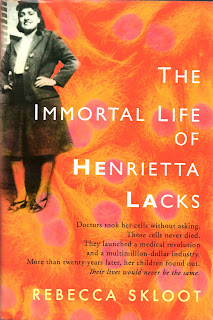 Quick book review today. I'll be honest I don't read much non-fiction. It's not deliberate, but my pile of choices aren't filled with biographies, history, or science. However, a friend left The Immortal Life of Henrietta Lacks for me to peruse. And wow, it's quite a story.

The author, Rebecca Skloot, was bored with college science until a professor spoke about the HeLa cells and the amazing medical research being done with these cells. Skloot perked up at the story (or actually, lack thereof) behind the cells. A poor black woman in the South in the 1950s, Henrietta Lacks, knew after the birth of her last child that something was seriously wrong with her. However, medical treatment was not easy to receive. She finally went to the doctor, who treated blacks for Johns Hopkins. He discovered a serious tumor on her cevix. The cancer spread rapidly and Ms.Lacks succumbed quickly. However, before she died, cells were collected and labeled. These cells divided prolifically. They did not die in a petri dish. As they grew and grew, they became a test tube business in the United States and abroad. The cells were used for research on cancers and numerous other diseases. For scientists, it was a goldmine.

Ms.Skloot continued her studies in science, but kept returning to this story. She began to dig deeper and to interview the Lacks family. As she uncovered facts about Henrietta, she was able to share the woman's story, and the family began to trust her and the discoveries. It wasn't a question of money or glory, the point of The Immortal Life of Henrietta Lacks is dignity. There was a real person, a patient who died, but gave life to thousands of people thanks to life-saving research and discovered medicines.

The Immortal Life of Henrietta Lacks is a phenomenal read. Well researched and extremely well written, it draws you in to the mystery, the characters, and documents a life of a woman - Henrietta Lacks, the real person behind the HeLa cells.
Posted by Joanne at 5:15 PM