the Monster in the Box: Fun Read 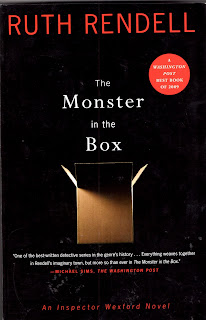 Summer time - I need poolside reads to keep the brain keen, not melted mush in the Texas heat. Ruth Rendell's Monster in the Box was a wonderful find in the last death throes of the local Borders. I had heard her author name, but never read any of her work. Now I'm hooked.

We meet Inspector Wexford under sad circumstances. A recent murder causes him to reflect on an early murder in his career and a particularly evil suspect named Targo. The short, muscular man wearing a scarf to hide a birthmark is wily. Wexford is positive Targo has been deliberately flaunting his seeming innocence and daring Wexford to accuse him. It seems Targo kills people who he feels others have deemed trouble in their lives. It's as if he thinks he has permission and can justify the strangling.

p.1 None of it could be proved, not the stalking, not the stares, the conspiratorial smiles, not the killings, not any of the signs Targo had made because he knew that Wexford knew and could do nothing about it..

Rendell's writing does not involve explicit gory details. The deliciousness of her book is in the characters, the cat and mouse game, and some missing persons essential to the investigation. All the while, the stoic inspector trusts his gut, and we trust him too, to track down the guilty party - deal with the Monster in the Box.
Posted by Joanne at 8:46 AM