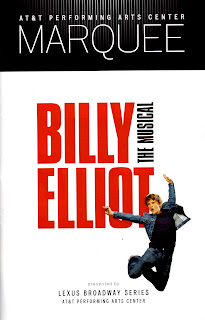 I'm late to seeing Billy Elliott: The Musical, but better late than never. I enjoyed the movie version immensely and wondered how it would translate to theater. It worked better than I expected and, of course, the dancing was phenomenal.

British Mineworkers went on strike in 1984 and it lasted one year. Margaret Thatcher held firm and broke the unions. Happy story, huh?

We meet Billy's family on the eve of the strike. His mother is dead. His father and older brother are coal miners - dedicated to the job and the union. Poor Billy is an eleven year-old kid, floundering in life, missing his mom, helping his doddering grandmother, and yearning to break free from his life. He just doesn't know how.

He attends boxing lessons, but doesn't want to hit or be hit. Fortunately, after boxing lessons the space is occupied by ballet lessons. He joins in by happenstance, likes it, worries over his young manhood, but can't shake the joy that ballet gives him - the freedom to express himself. The teacher (Faith Prince, an old Broadway veteran) sees a spark in Billy. He has a chance to escape this bleak town and future and perhaps audition for the National Ballet Company.

Naturally there's a lot of angst, issues, and ultimate (strikers, family, teacher) confrontation. Fortunately, the dances flow, the singing is decent, and Elton John's music with Lee Hall's book and lyrics, is pleasant. Billy Elliott's message of finding yourself, expressing yourself, and looking to the future is an inspiring one.