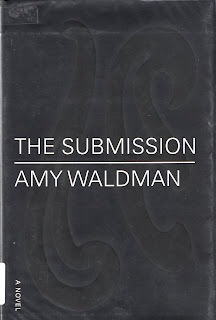 The envelope is opened. Who shall be the winning architect to memorialize a devastating terrorist attack? What if it is an American Muslim?

The Submission by Amy Waldman explores the shocking result of an anonymous fair process, the ultimate debate, art, Islam, and conflict. Well paced and full of fleshed out characters, this book, as per the inner jacket, is a striking portrait of a fractured city striving to make itself whole.

I liked the architect, Khan, who just wanted to win. His story, as the son of immigrants from India, is the American dream. His vision for the memorial sounded perfect to me (p.4): The concept was simple: a walled rectangular garden guided by rigorous geometry. At the center would be a raised pavilion meant for contemplation. Two broad perpendicular canals quartered the six-acre space. It goes on to describe the victims' names on a white wall and steel trees made from salvaged scraps. Their forms would look organic, but they would resist a garden's seasonal ebb and flow.

Lots of perspectives, politics, and angst fill The Submission. This is a timely well written portrait of a sensitive subject. Kudos to Ms.Waldman.