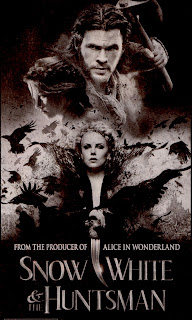 Snow White & The Huntsman is a mixture of really, really good and then a goodly portion of blah. The previews were dramatic and wow-worthy. They got my hopes up, but alas the movie dashed them during the boring bits.

So, we see how Charlize Theron's Ravenna came to be the Queen, and banished the King's daughter, Snow White, to a tower. Charlize on screen is magic. She is beautiful and cold and evil, and her powers are scary. Here's where the special effects are sha-zaam - shards of black glass flying, crows transforming, black ooze everywhere. To me, these are award winning.

Chris Hemsworth, as the Huntsman, is abworthy with his blue eyes, athletic build, and cool accent. He's hired by the queen to find Snow White after she escapes to the dark forest. He's only out for money to drink, and finds his prey easily. The key to the movie is his transformation from duty to the Queen to allegiance to Snow White. He carries this off with aplomb and good fight skills.

Then there's Snow White. Kristen Stewart does not have that extra glow of inner beauty to make us love Snow White. She always looks pained and her expression goes from bland to oh-no I should maybe furrow my brow, to oh-no this is horrible, to oh-no I'm trying to act. One would think she's grown in her Twilight Bella role, but unfortunately she needs more lessons.

To me, the movie spiked any time the Queen was conjuring more evil. Yeah, you root for Snow White to win, but Kristen doesn't urge us to love her. That's a huge downfall. Plus some of the pacing of the film is slow. They fight, scurry on, fight some more. This film needed to be edited and tightened. The dwarves are good enough but needed more distinctive personalities and again their interaction with Snow White depended on them telling us they felt her wonder and beauty - she did not emote such glory.

Snow White & The Huntsman seemed to appeal to the teens in the audience. They applauded. Some of us grumpy moviegoes wanted to be happy or dopey, but we ended up a tad sleepy during the chase scenes. I'll give this an A for special effects, Charlize/Queen, and Chris/Huntsman and a D for Kristen/Snow White. So on average it was entertaining for matinee price, but keep your expectations lowered, and don't bite into any poison apples.
Posted by Joanne at 9:13 AM