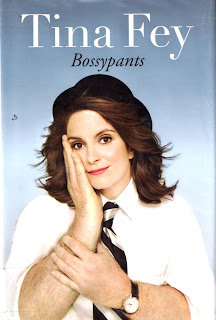 I'm late to the Bossypants by Tina Fey party. However, I saw this at the library and snatched it up, then proceeded to read it in two days. My husband often had to leave the room, as I was snorting, giggling, and laughing to the point of hysteria. Perhaps it was the bad haircut picture, but I could identify with Tina Fey's childhood, and her clear discussion of dorkiness.

I watched on television when she won the Mark Twain award for humor. Indeed, she basically said, "How can I win this when I had a happy childhood?" She was the youngest child and obviously accustomed to being around adults, being the center of attention, and seeing the world in quirky fashion.

From Chicago's Second City to New York's Saturday Night Live, Tina Fey has brought verve and nuance to the world of sketch humor. She's just so darn clever. And the movie Mean Girls is a gem.

Here's one excerpt from Bossypants that had me rolling: page 104
My mother knew the importance of getting the right fit for a bra, so she took me to JC Penney and tried one on over my clothes. She tried a bra on me over my clothes in the middle of JC Penney. I thank her for this. This early breast-related humiliation prevented me from ever needing to participate in "Girls Gone Wild" in my twenties.

Absolutely hilarious read from start to finish.
Posted by Joanne at 2:45 PM