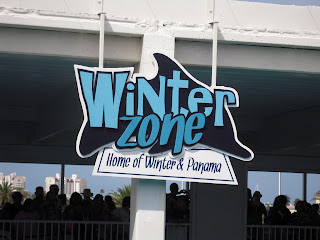 Here's a fluff piece for a super hot July day in Texas. Supposed to 108 degrees F by six tonight. Whew! Our pool's a spa. Thus, let's go back to early July in Clearwater Florida. Ray and I headed to the Clearwater Aquarium, which specializes in aquatic animal rescue, rehab, and release. 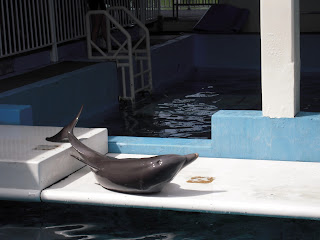 Winter is the famous dolphin featured in A Dolphin's Tale. Found as a baby caught in a net, wounded - survival was doubtful. However, the creature persevered. Then with the creation of a prosthetic tail, Winter thrives, swims like a pro, and is a hero to many. The research involved has helped in producing better prosthetic limbs for soldiers. We never did see Winter, but the documentary at the aquarium is a tearjerker - very impressive story. 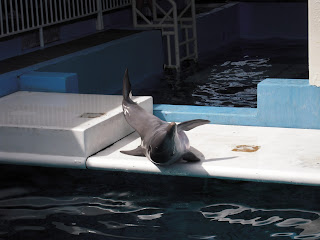 This is Panama and it delighted the crowd with dolphin antics. Anything for a treat. The Clearwater Aquarium offers a lot of teaching moments for young kids. They are a non-profit organization, ever vigilant in the care of our precious sea creatures.
Posted by Joanne at 9:31 AM