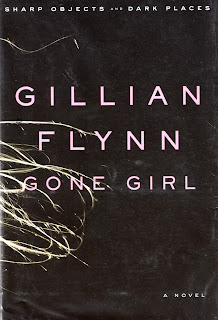 Gone Girl by Gillian Flynn has had good buzz since the beginning of 2012 and this book is worthy of praise. It was on my library wait list forever. I  finally got the call, and read it in three days (could have been quicker if work didn't get in the way).
The book jacket tag line is Marriage can be a real killer.

Nick and Amy. Amy and Nick. Oh they seem like the perfect, beautiful couple as they prepare to celebrate their fifth wedding anniversary. However, a neighbor calls Nick at his work to say that the front door of the house is open and it just looks weird. Nick comes home to find Amy gone - blood, an overturned ottoman, signs of struggle.

As we alternate chapters -Nick deals with police, his in-laws, his twin sister, and his anniversary treasure hunt (Amy always leaves clues). Then we read excerpts from Amy's diary. Appearances are deceiving and we learn more and more about their life in New York, then moving back to Nick's old home town in Missouri, along the Mississippi River.

I'm not going to tell more. You need to read and discover on your own. Twists and turns galore - lies, deceits, and inappropriate behavior. The golden couple is tarnished.

p.73  And if all of us are play-acting, there can be no such thing as soul mate, because we don't have genuine souls.
It had gotten to the point where it seemed like nothing matters, because I'm not a real person and neither is anyone else.   I would have done anything to feel real again.

p. 353  I am a thornbush, bristling from the overattention of my parents, and he is a man of a million little fatherly stab wounds, and my thorns fit perfectly into them.

Excellent writing. Intriguing characters and plot line. Gillian Flynn's Gone Girl is a gem.
Posted by Joanne at 8:35 AM