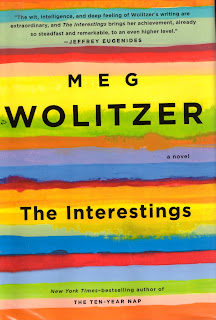 The Interestings by Meg Wolitzer is a panoramic novel about what becomes of early talent, and the roles that art, money, and envy can play even in close friendships. (book cover blurb). It is 1974 and six teens at summer camp embark on a journey of lifelong friendship. Julie (now Jules) Jacobson feels at home with this artsy group of misfits. They declare themselves "interesting" and at fifteen, while self-indulgent, they see a bright future ahead for all of them.

Here are the opening lines of Chapter One - On a warm night in early July of that long evaporated year, the Interestings gathered for the first time. ...Julie Jacobson, an outsider and possibly even a freak, had been invited for obscure reasons, and now she sat in a corner on the unswept floor and attempted to position herself so she would appear unobtrusive yet not pathetic, which was a difficult balance.

Oh, that SO sums up being fifteen or sixteen.

But, as we read and learn more about their lives, the group has its winners and losers. Jules becomes a therapist, not the comic actress she had hoped for. Jonah, a gifted guitarist, becomes a mechanical engineer, after an offshoot time with the Moonies. Ethan, ugly and brilliant, achieves success with a hit animated TV show and franchise. His wife, the lovely Ash, is also successful as a director. They are the perfect pair, and yet despair as a child measures on the autism scale. Cathy and Goodman (Ash's bohemian brother) change their lives forever when she accuses him of rape in college. Lines are drawn, and the perfect friendships fracture.

A lot happens from teen angst, hopes, and dreams to adult maturity, love, marriage, children, family deaths, and illnesses. The Interestings is complex and wide-ranging in scope, yet intimate page-by-page. Jules is our main focus and our flawed heroine. Meg Wolitzer is a solid writer and truly delves deep into her characters and life. The reader will recognize these people, and in turn can judge decisions made or ignored. Life evolves and so does this book. The reader will enjoy the good times, be frustrated at times, and root for this group of friends to just live, laugh, and love.
Posted by Joanne at 4:17 PM