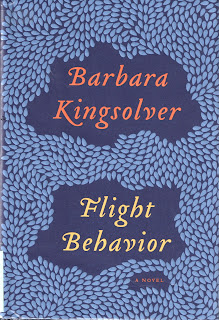 
Dellarobia Turnbow is a restless farm wife, who became pregnant too young, lost the baby, stayed married, and is now the mother of two. She's just going through life, sure there has to be more out there. In a morning of escape, she enters the usual valley and it's alit from within. Turns out monarch butterflies, hundreds of thousands, have gone off kilter and taken up existance far from their normal path.

Now journalists, tourists, and scientists invade this rural neck of the woods and turn life as Dellarobia knows it upside down. Flight Behavior takes on one of the most contentious subjects of our time: climate change. With a versatile empathy, Kingsolver dissects the motives that drive denial and belief in a precarious world. (cover blurb).

Ever since The Poisonwood Bible, I've been a fan of Barbara Kingsolver's writing. She brings characters alive in real situations, and can handle complex issues without too much preaching. I did find myself skimming a bit at the end, but was still satisfied with the conclusion of the story. Dellarobia is rich in humor and smart with common sense. The opening line of this book will draw you in - A certain feeling comes from throwing your good life away, and it is one part rapture.

Join Dellarobia as she keeps trying to flee her life, and yet has to stay grounded too. Flight Behavior is more than butterflies, it's human too.
Posted by Joanne at 9:53 AM