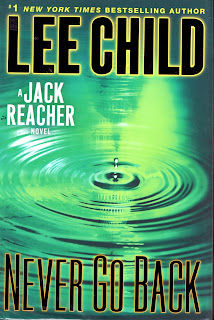 "Never go back...but Jack Reacher does, and the past finally catches up with him." (cover blurb). Author Lee Child has another Jack Reacher hit with Never Go Back.

Former military cop, Jack Reacher, travels once again with his toothbrush and his wits. Brawny and over six foot tall, this military machine is prepared for almost anything except the thought of fatherhood. However, he's come from South Dakota to Washington DC to meet with Major Susan Turner at his old 110th MP HQ. But Turner's now imprisoned, and he's on his way due to criminal charges of murder. Plus another case has risen - paternity.

Nothing is as it seems. Reacher breaks himself and Turner out of jail and heads west to meet his alleged 15 year old daughter. Along the way, he discovers two American soldiers have been killed in Afghanistan under Turner's watch. Here at home, four soldiers stationed out of Ft.Bragg seem determined to stop Reacher and Turner from drawing conclusions about those deaths, money, trades, and a network of intrigue out of Afghanistan.

Jack Reacher moves at a quick pace, not to mention he's involved in car chases, fights, ambush on an airplane, a little love in the afternoon, and plenty of dining at greasy spoons. In Never Go Back, "Jack Reacher questions who he is, what he's done, and the very future of his untethered life on the open road." (cover blurb). This is a fun book in a great series - page turning intrigue at its best.