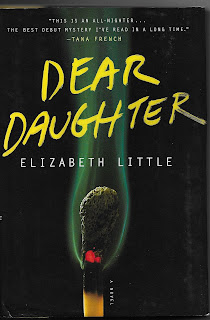 Dear Daughter by Elizabeth Little is an excellent debut mystery filled with interesting characters, twists and turns, and a fast pace. Janie Jenkins is fresh out of prison. Ten years ago, this “It Girl” was incarcerated for the murder of her high society mother. Released on a technicality, Jane is determined to figure out who really killed her mother. And is the killer looking for her?

Small town Dakota is the starting point. As Janie delves deeper into her mother’s former life, finds photographs, reads an old diary, she begins to admire her mother’s climb from oblivion to a new name to a life of money.  And the mother she herself dismissed,  turns out to have had quite a life. Dirt poor but resourceful, Tessa wasn’t meant to be held back. Janie, in her journey, learns to admire her intelligent mother.

From the cover blurb – As she digs tantalizingly deeper, and as suspicious locals begin to see through her increasingly fragile façade, Janie discovers that even the sleepiest towns hide sinister secrets – and will stop at nothing to guard them. On the run from the press, the police, and maybe even a murderer, Janie must choose between the anonymity  she craves and the truth she so desperately needs.

Janie is not initially likeable, but her story is compelling and you will want to turn the pages. The author knows how to push our buttons and Janie’s in the search for the truth. Who is the killer? Dear Daughter will satisfy your thirst to know.