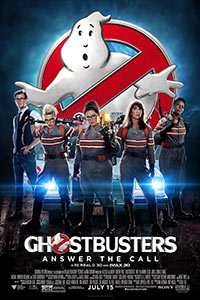 Ghostbusters is just flat out silly, zany fun. Yes I saw the original and it was silly zany fun too. I am not going to compare. As far as I’m concerned this movie stands on its own.  Melissa McCarthy, Kristen Wiig, Leslie Jones, and Kate McKinnon are a strong group of comedic women. Some nut case hotel janitor has designed equipment in the basement to unleash the haunts of New York. Paranormal measurements are through the roof, and McCarthy’s seeing the fruits of her labors. She and McKinnon have been working on a shoe string budget out of a no-name school studying polarities, vortexes, and other mumbo-jumbo that adds up to ghosts.  Wiig’s tried to climb the noble path of academia, but gets derailed by social media and her former partner. Now she’s drawn back in for the sake of science.

And Leslie Jones works for the MTA. She encountered the nutter AND a ghost creature in the subway. She’s a believer AND she has her uncle’s vehicle to use – is it a hearse? Oh you bet. Yes, the women arrive with equipment to capture ghosts. They stream a force field, etc. Yes, Wiig keeps getting slimed. And cameos abound from the original – keep your eyes peeled for Bill Murray, Annie Potts, Dan Ackroyd, Ernie Hudson, a bust of the late Harold Ramis (comedy genius), and Sigourney Weaver. As I said, this movie is glorious summer fun. Zingy lines, good effects, the New York skyline. What’s not to like?

Kudos to Kate McKinnon – she absolutely cracked me up. As we know from her Hillary sketches on SNL, she can do wide-eyed crazy very well. In this movie, she steals scenes as you wait to see what she’s gonna do next. I actually went into this movie with so-so expectations. I planned on being amused, but frankly it had many laugh out loud moments. Ray cracked up too and we gave it a thumbs up for our five dollar each matinee investment.

Who you gonna call for two hours of cool theater fun? Ghostbusters…….I ain’t afraid of no ghosts.