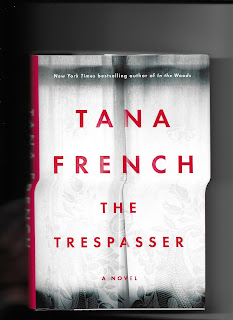 Tana French knows how to engage her reader. She just writes like blokes in Dublin would talk at a police station. You feel you are in on the interrogations and confessions. And you are hearing the internal dialogue of Antoinette Conway. She’s a detective on Murder Squad, her dream job. Her partner, Stephen Moran, is awesome and they are a team. BUT. The rest of the working crew are giving her the “shite” jobs and harassing her. Oh, it’s subtle, but it’s wearing her psyche and maybe she’s ready to break.

The Trespasser is the latest book in a series of excellent crime fiction. I discovered French with In the Woods and have followed her ever since.  So, the new case looks like a lover’s quarrel gone bad. Aislinn Murray is blond, pretty, groomed to a shine, and dead in her pretty living room. There’s nothing unusual about her – except that Antoinette has seen her somewhere before. (cover blurb)
Looks easy, but this case turns messy with a lot of twists and turns. Other detectives are pushing for a quick solve, but why? And of course, there’s more to the victim than what is seen on the surface.

Conway is feeling paranoid, fights with her partner, and is ready to quit.  But you will root for her to see this through. You want her to get resolution with Stephen – he’s a good guy. And poor Aislinn deserves to be buried with dignity. We need to know who killed her and why.  Tana French will throw you some red herrings and clues. Stick with her to the end and you’ll say – whoa! I knew it wasn’t easy but Conway pulled it together. (that’s the only bone I’ll throw you)  Check it out and solve this crime.