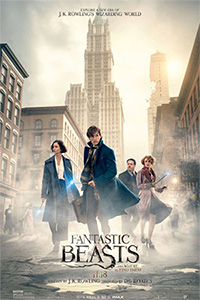 Fantastic Beasts and Where to Find Them is in theaters now and it’s worth seeing on the big screen. J.K. Rowling is back with a prequel, so to speak, to Harry Potter world. Eddie Redmayne as Newt Scamander shows up in 1926 New York City from London with a rather magical bag. He’s a magizoologist and thus the adventure begins. The wizard world vs the Muggles in the UK or the No-maji (as known in the US) is in flux and more trouble is not needed. But his encounters with a “normal” guy played by a funny Dan Fogler involves switched bags, an escaped creature or two, a hatching egg, some lovely sisters, and more.

Eddie, with his mop of hair, dusting of freckles, and wistful smile, is perfect as the shy magizoologist who’s trying to save creatures and keep the magic alive. He wants no trouble. But Colin Farrell and his gang are seeking “troublemakers” and a host of explosions and destruction in NYC is causing an uprising. The theme of who’s “different” and how to get along is subtle. Fogler falls for one of the sisters and Katherine Waterston works with Newt to corral his creatures, erase Dan’s mind, and make peace.  I won’t give away the surprise at the end as far as the serious trouble and evil spirit. It’s all cleverly done.

This is a big movie with lots of special effects and a worthy lead up to Potter World backstory. I would have edited the movie a bit – it ran a tad long. However I was entranced and intrigued by the premise. Rowling knows how to fill in characters and create a world. I liked Eddie a lot. So if you are looking to escape with a big tub of popcorn, Fantastic Beasts and Where to Find Them is worth seeking at your nearest Cineplex.
Posted by Joanne at 6:00 AM