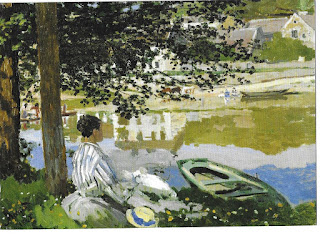 Monet : The Early Years is a splendid new exhibit at the Kimbell Art Museum in Fort Worth. It runs through January 29, 2017 and is worth a trip. I shall probably go see it again, as there’s much to see and enjoy.  Over sixty paintings cover Claude Monet from his debut in 1858 until his move to Argenteuil on the River Seine in 1872. He showed genius from the beginning and his early career (all in his 20s) assured him of a place in the art world. He transformed influences and challenged his fellow painters – Manet, Pissarro, Renoir, and Sisley – along the way.

The above picture On the Bank of the Seine illustrates his skills. Water, sky, clouds – he became a master impressionist.  You will be astounded at his skills at such an early age. And he stayed a student of art through his whole life. He studied light – one picture with reflections in water just glistens. Gossamer clouds in the sky. Fleeting pinks and purples enhance a delicate palette.  He often returned to places over seasons and captured the different aspects of nature. His time in Holland proved enlightening and you can see the difference in the colors and how he interpreted life there.

I highly recommend a trip to the Kimbell.   Monet: The Early Years is a feast for the eyes and the soul.  (and then I recommend lunch at the museum café – tres bien!)
Posted by Joanne at 6:00 AM