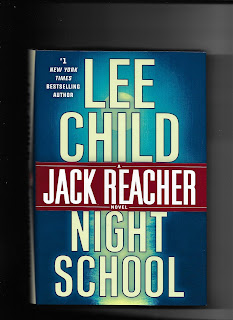 You can always count on Lee Child to come through with an exciting read. Night School is no exception.  1996 and Jack Reacher is in the army receiving another medal for merit. Then he’s sent to school. Sounds boring, but he’s off the grid and the classroom holds him, an FBI agent, and a CIA analyst. Forget reading, writing, and ‘rithmetic – how about chasing the reason for a hundred million dollars getting into the hands of a Jihadist sleeper cell. Tasked with finding the American with the money and finding out what’s in exchange takes Reacher and his chosen partner, Sergeant Frances Neagley, to Hamburg, Jalalabad, and Kiev.

Cover blurb – Night School moves like a bullet through a treacherous landscape of double crosses, faked identities, and new and terrible enemies, as Reacher maneuvers inside the game and outside of the law.

Ricochet with Reacher and rebound at every challenge. He’s a large man in charge of a commanding presence, yet light on his feet, and smooth with the patter. He trusts his gut, and is fast with his hands. Lee Child never disappoints. The author is at the top of his game with Reacher. Set aside time because once you start this book, you will want to finish it. Going back to school can be fun.
Posted by Joanne at 6:00 AM