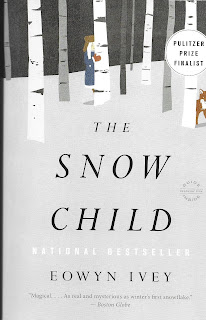 I enjoyed The Snow Child by Eowyn Ivey with a book club.  It was a worthy read and discussion and left me pondering part of the overall book. Was she real or not? I don’t have the answer – you will need to read and decide for yourself.

It’s 1920, Alaska and rough country for Jack and Mabel to homestead. As they try to maintain their marriage after she miscarries, the hard work  and loneliness cut a larger drift in their lives. But one evening, the first snow of the season begins to fall. Jack and Mabel build a child out of snow. Cover blurb: The next morning the snow child is gone…but they glimpse a young girl running through the trees.  Faina, as she calls herself, hunts with a red fox and survives in the wilderness. She visits the couple more and more and slowly accepts their food and affection. As they come to understand this child, who could have stepped from the pages of a fairy tale, they begin to love her as their own daughter. But in this beautiful, violent territory, things are  rarely as they appear, and what they learn about Faina will transform them all.

The descriptions of Alaska are beautiful. Ivey lends a wide range of vocabulary to the haunting wildness of the terrain. Her characters begin weak – will they make it in their new home? But Mabel and Jack grow backbones. They meet neighbors who are quite colorful, and slowly there’s a humor and  richness to all their lives as they harvest the bonds of friendship. And Faina is the sprite who grows up before them. She brings anticipation to Mabel’s every day.  P. 117 The December days had a certain luminosity and sparkle, like frost on bare branches, slight in the morning just before it melts.

The Snow Child is a unique story, rich in character, setting, and twists. It’s got roots in the Alaska earth, and also has a freeing native spirit – a mysticism of sorts. I liked this book a lot, as did my book club group. What do you think about Faina?  Read it and see.