Book Review - Wrong Side of Goodbye by Michael Connelly 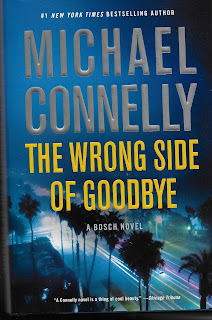 Harry Bosch is Michael Connelly’s lead character in a series of detective books had thirty years in the LAPD. But now he’s out and doing his own private investigating in The Wrong Side of Goodbye. A reclusive billionaire contacts Harry. He’s haunted by a regret and wants Harry to find a child he might have fathered. This was long ago, but there’s a vast fortune at stake.  Is the Mexican girl, now an old woman, still alive? Is she even in the country? Did she have a child? There’s danger ahead for the man, for Harry, and for the possible heir or heirs he’s seeking.

Cover blurb – But as Harry begins to uncover the haunting story – and finds uncanny links to his own past – he knows he cannot rest until he learns the truth.

Meanwhile, Bosch volunteers for a small town police department and tracks a serial rapist – a baffling and dangerous foe. Michael Connelly keeps all of the balls in the air as you hold your breath for Harry. For a retired detective he’s the busiest man in Los Angeles. Fast paced, The Wrong Side of Goodbye, is a darn good read with several  satisfying twists and turns to a crazy ride and  heart pounding ending.