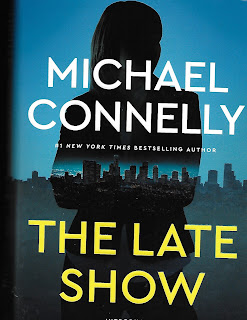 Michael Connelly changes gears from old Harry Bosch. This time in The Late Show he introduces us to young Renee Ballard, a tough detective trying to prove herself. She’s been shoved into the midnight shift due to some office politics – punishment for filing a sexual harassment complaint against a supervisor. It’s frustrating, but she’s working hard to do her job and move on. The book leaps into two cases that will keep her busy. First a prostitute is badly beaten and left for dead – a sign of an evil killer at large. Then a nightclub shooting has all the earmarks of gang activity and a possible cop on the inside. Oh the web tangles and Renee has a lot of work ahead of her.

From the cover blurb – As the investigations entwine, Ballard is forced to face her own demons and confront a danger she could not have imagined. To find justice for these victims who can’t speak for themselves, she must put not only her career but her life on the line.

Renee Ballard is an exciting new character and I look forward to reading more of her in Michael Connelly’s books. The Late Show proves to be a page-turner. Fast paced and riveting – everything you want in a crime drama thriller.
Posted by Joanne at 6:00 AM