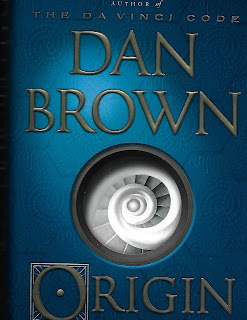 It’s tough to read a Dan Brown book featuring his Professor Robert Langdon, and not imagine actor Tom Hanks running around exotic locales figuring  out the mystery. The movie is already on the pages. Origin is no different.  Edmond Kirsch is a genius billionaire and futurist who is about to make a bold announcement that will stun scientists and the world. He was a student of Langdon, and claims his breakthrough will “answer a fundamental question of human existence”.

In a huge presentation, guests are immersed in a multi-media event. But chaos erupts, there’s a murder, and the “discovery teeters on the brink of being lost forever.” (cover blurb). Robert Langdon must escape the Bilbao museum with Ambra Vidal, the museum director and fiancée to the prince of Spain, heir to the throne.  Ambra was a good friend to Edmond and now worried about a conspiracy. Key religious figures are disappearing, and perhaps the Cardinal is to blame. “Navigating the dark corridors of hidden history and extreme religion, Langdon must evade a tormented enemy.” Modern art, symbols, and the usual mumbo-jumbo lead Robert Langdon to clues to uncover answers.

Origin by Dan Brown is an amusing read. It’s breezy and skimmable, a fluff thriller that throws in a lot of blather to make it sound edgy. And it should be another chance for Tom Hanks to run around exotic locales. Thank goodness, he has job security.