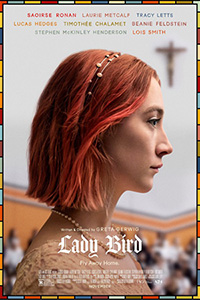 Lady Bird is the first artsy movie in a while that’s been on my radar, lived up to expectations, and is worthy of Oscars. High praise. Saoirse Ronan is a formidable young actress and her portrayal of Christine “Lady Bird” is amazing. She’s  a senior who wants to leave…just leave Sacramento – ready to fly the nest – head to NYC or anywhere. So her math grades aren’t awesome and she has an attitude, but she’s very open to new experiences. Chomping at the bit.

She’s a young lady with doting parents. The key is her mother played by Laurie Metcalf (also Oscar worthy). The mom is a nurse/counselor for a psychiatric hospital and works hard. She also puts up with and fights “Lady Bird” on many levels, but it is with care and concern. There are too many great moments to mention in this “little film”. It’s about life, day to day interactions. It’s about Lady Bird surviving Catholic school. She cares and yet bursts at the seams to not be Catholic. She’s excited about her first boyfriend (Lucas Hedges) and then is disappointed. This movie is about traversing that senior teen year when you just aren’t quite a grownup but think you are.  And meanwhile, your parent knows you aren’t a kid, but just can’t let go.

Lady Bird is a gem with so many good moments. It’s quiet even when it’s loud. It’s funny even when it’s poignant. I am gushing and could see this again in a heartbeat. Go flap your wings, remember your potential at eighteen, and see this film.