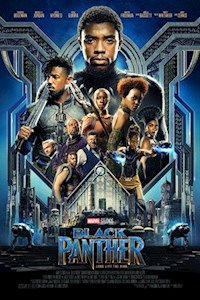 Marvel’s Black Panther is a feast for the eyes – the stunning visual effects of the world of Wakanda are lovely. The acting is all stellar. Sharp writing, plenty of action/fights, and a story of power and redemption complete the tale directed by Ryan Coogler.  There have been a lot of articles and essays written about Black Panther – all for a higher purpose than pure cinematic delight. I’m going to stick with just the movie going experience of this critic – a middle-aged woman who wants to be entertained for her five dollar investment. Ka-ching! This movie absolutely works on all levels. If you wish to delve into some issues – by all means. The movie can make you think. Or just sit back with a big tub of popcorn and watch Chadwick Boseman nail it as T’Challa, the new king of Wakanda – a country that hides its riches (the vibranium metal) from the rest of the world.

It is a city filled with technology, powerful women, and an appreciation for its history and rituals.  Here’s the impressive cast of women – Angela Bassett (mother), Letitia Wright (science nerd sister),and Lupita Nyong’o(Nakia – the activist ex).  Close friend W’Kabi is played by Daniel Kaluuya.  Then there’s trouble – brooding Michael B. Jordan, the Killmonger, seeks revenge and more. There’s a whole background buildup to his story. It starts in Oakland, CA and finishes in hand-to-hand combat, victory, and some d words – defeat, defiance, etc.   I won’t say more…. But I will say that Danai Gurira the shorn elite member of the royal squad is fierce. Her attitude is scary and she swings a mean spear.

Black Panther is set in a fantasy world. Like I said, you can extrapolate from there into more meaning, concerns, etc of modern day America.  Or you can enjoy the slick purring moves of a sleek panther. Stick around during and after credits for those Marvel teasers they give us. Keeps us coming back for more. Meow!