I admit I am a sucker for movies about journalism. Old fashioned nose for news, knock on doors, make phone calls, and then clack in some letter type and let those presses roll…..hum and rumble and watch old fashioned newspapers roll off the presses. Oh my. I can smell the ink.

That’s what The Post, Stephen Spielberg’s latest time capsule, is all about.  From Time Magazine 1/15/18 -  This historical drama about the 1970s publication of the top-secret Pentagon Papers is swooningly  in love with journalism. 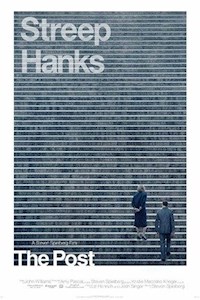 Basically the Papers detailed the scope of the Vietnam War in vast detail – the US was mired in a mess and the top brass knew it, but did not reveal the problems, and dug deeper into war. This was a grave mistake for the public.  The NY Times broke the story, got stymied by courts, and the Washington Post took the ball and ran with it.  This was a huge decision by Katherine Graham, the owner of The Post, who was trying to take the company public. Lots of conflicts. The movie explores internal back story, while the news is breaking.  The pace of the movie is intense.

Meryl Streep, as Katherine Graham, is amazing as an actress. You can see her thinking, weighing options, affected by her Washington connections (i.e. the Defense Secretary, etc), and then choosing publication come hell or high water.  Ben Bradlee (Tom Hanks) is the salty chief who is for publication all the way.  The movie has many a conversation and argument in regards to publish or perish. This movie is a bit old school, but in a good way. Spielberg knows his audience

I loved a quote near the end of the movie. Katherine says that her late husband stated, “The press is the first draft of history.”  Think about that as it pertained to the early 1970s, the upcoming Watergate era, and now the press today and all the talk of “fake” news.  No matter what – we need the fourth estate to report and keep us in the loop. The Post is a cinematic take on history and also a commentary on today.