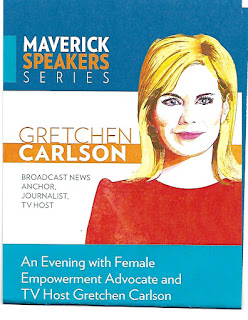 Ray and I saw Gretchen Carlson at the final UTA Maverick, Speaker session for this school year.
She was awesome.  This woman was a former Miss America winner from Minnesota. She's a Stanford graduate. She's a successful journalist from NBC, CBS, and Fox News.  As a registered independent, she prides herself on her lack of bias. She worked hard to get where she was, and unfortunately encountered sexual harassment along the way.

Enough was enough.  Twenty months ago, she was the first very public face to call out her harasser - Roger Ailes from Fox. She brought down this mogul fair and square and opened up a whole new world in regards to the workplace. Women from all walks of life - rich and poor, black and white, old and young said "enough was enough." Time's Up.  Me Too.  You name the tag line - we could all relate. I include myself in regards to some verbal situations. Women should not have to question themselves. They should not have to worry about their jobs if they don't "submit" to something ridiculous.

Ms. Carlson gave an excellent talk and her continuing work to empower women is awesome. She was quite inspirational and her true hope is that her kids and those of the next generation do NOT have to put up with such crap. I truly hope her work is not in vain.