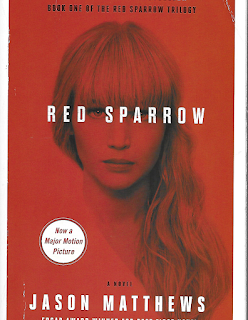 I found Red Sparrow by Jason Matthews intriguing and annoying.  It’s a normal length book but at times I felt I was slogging through the Gulag. Then other times it was fast paced and interesting. I kept reading, skimming, reading because I wanted to know what the heck happens to the girl.

It’s present day Russia and Dominika is recruited to be a “Red Sparrow” – trained seductress, spy, and assigned to American CIA officer Nate Nash. That’s all well and good. I liked her story line and I liked Nate’s . I liked their interactions and what ultimately transpires between them. However, there was a lot of other background material with a lot of Russian names that were damn confusing. Hence, the skims at times.

The writer is a former CIA officer and obviously knows his stuff…maybe too much.  To me, there was almost too much about many of the other horrible Russian agents, and then the annoying cat and mouse games. I am committing sacrilege but it’s like reading John Le Carre (always praised by critics).  I say – Jesus, get on with the story, man……

The cool things about Dominika is she sees in colors –It’s like an extra sensory skill and that helps her cull out trouble and evil from decent and good.  Nate has a purple aura – he’s a “good” guy.
The movie starred Jennifer Lawrence. It got so-so reviews, but after reading the book I’m now curious for it to show up on Netflix. I wonder if they cut out many of the annoying bits and hit the key plot points.  A friend lent me this book, so I got to read it for free.  That’s the best….so if you think you are interested, go find Red Sparrow at your local library.  Da! And a vodka shot for you