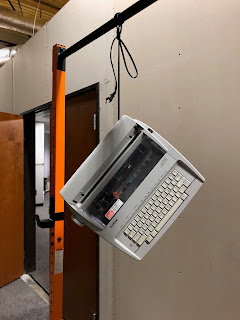 No, I'm not giving up writing.  But at work, we are still using an ancient software program, and if there's a "change" on a spec, you have to use the typewriter to mark an asterix above the issue. I know this sounds ridiculous and weird and convoluted. It is.  We are trying to get out of 1980 and into the 21st century.

Meanwhile, this typewriter officially died. So the guys debated and decided to hang it from their chin up bar for awhile.  Just cuz.  They said I could beat it like a pinata.

Now if only the "spare" typewriter would die too.  Maybe that would increase the urgency for a new program.

Believe me - we are a very weird little company.  But hey, on Friday I can leave early - so I'm sticking around.

Have a great weekend.  This also counts as the Saturday "F".
Posted by Joanne at 6:00 AM