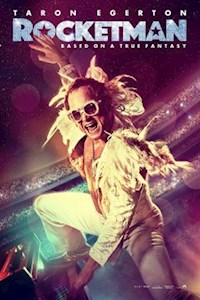 So many good songs fill Rocketman – a fantasy musical based on the life of Elton John. From chubby Reginald Dwight to consummate entertainer Elton John, the lyrics by Bernie Taupin and the score by Elton tell the tale of a musical prodigy nerdy boy from England to the over-the-top man who made himself Elton John. Taron Egerton does his own singing, and while he doesn’t mimic Elton, he brings the soul of Elton to the screen. From shy insecure boy who yearned for love and attention from heartless parents to an insecure man unsure of his sexuality, his music skills, and dependent on outrageous costumes and behavior for attention, Elton John is a unique creation in music history.

Jamie Bell plays Bernie Taupin and he’s the rock who was and is always there. Richard Madden plays the attractive love/lawyer/manager who uses Elton. Gemma Jones is the loving grandmother for Reggie. Bryce Dallas Howard does a good job as the selfish mother. But it’s Taron at center stage and he’s excellent. Your Song, Goodbye Yellow Brick Road, Rocketman, Don’t Let the Sun Go Down on Me, Honky Cat, Crocodile Rock, and more – your toes will tap or you’ll want to sing along. And of course, after all the alcohol and drugs and excess, I’m Still Standing – that sings/says it all.

Rocketman is great on the big screen, and you’ll come out singing Elton songs – appreciative of the craft of the Taupin/John collaboration. Like a Candle in the Wind….